Canyoniers use a rating system to describe the difficulty, nature and duration of their routes. Our route has been variously rated 3B, 3BII 3BIII and 3AIII, all reviewers agreeing that the general difficulty merits a Class 3 designation:

The difference between “A” and a “B” relates to whether the route includes water obstacles. “A” means normally dry or very little water (up to waist deep); “B” means water, possibly with light current, swimming expected. The consensus for our route is B (water hazards), but one reviewer rated it A (dry) probably having visited during a dry spell. The duration rating is dependent upon the exact route taken.

Our route took 5 hours and was relatively dry, so let’s call it a 3AIIi.

At the top of the Pool Arch headwall was an ancient Juniper with a webbed strap wrapped around it as an anchor. There was some concern about our anchor being just this small Juniper, but, having backed into its cousin with my Jeep at the Grand Canyon without even scratching it, I was confident there was nothing to fear – that tree wasn’t going anywhere.

Alex got to work unpacking the climbing ropes and rigging the gear while the rest of us put on our harnesses and gloves. After double-checking all connections, Alex asked for a volunteer to go first – our first rappel, a single pitch, 130 feet.

ONE HUNDRED AND THIRTY FEET!?!

We all looked down at the ground or stared up into the sky, averting each other’s eyes. Silence. You’d have thought it was Gallipoli, 1915, and the whistle to rise from the trenches had just been blown.

Then Kelly the Brave, the sole rock climber among us, stepped forward and said, “Okay, I’ll go first.” 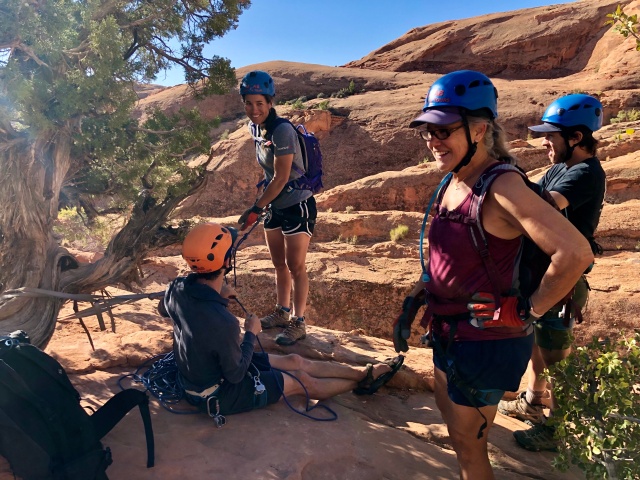 Here goes Kelly from the top of the headwall, into the abyss: 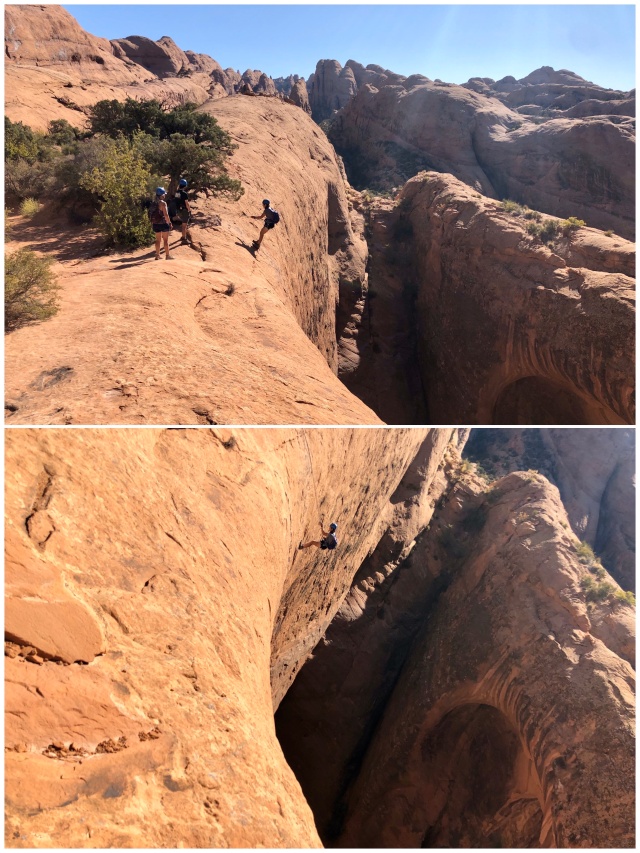 Next up, Dakota. Notice there are two ropes: a top-rope, fed through Dakota’s ATC (Air Traffic Controller) and then dropping down below him to the canyon floor; the other, a blue rope (a top belay) clipped onto his harness and eased out by Alex during Dakota’s descent.

This sequence of Dale, below, will give you the complete picture. As I said, it’s 130 feet from the top of the headwall down to the canyon floor. Opposite the headwall is Pool Arch, a fin arch of Navajo Sandstone, 90 feet high with an 80 foot span, visible in the photo, below, bottom left. Kelly, already at the bottom, took the last photo from the canyon floor as Dale went over the edge from the top.

Alex used a Munter Hitch to belay us from the top in case we went down too fast (photo, below, top left). That top belay also acted as a safety line. 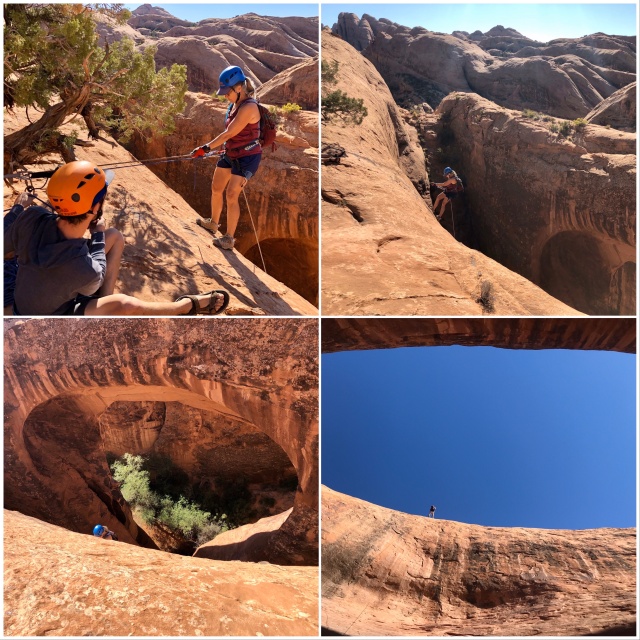 The process on this rappel was to walk down for the first 20 feet or so, feet outstretched against the wall, weight back, bent at the waist, and to then free rappel the next 50 feet until reaching the point where the cliff face bowed back out, then standard rappel the rest of the way to the bottom. 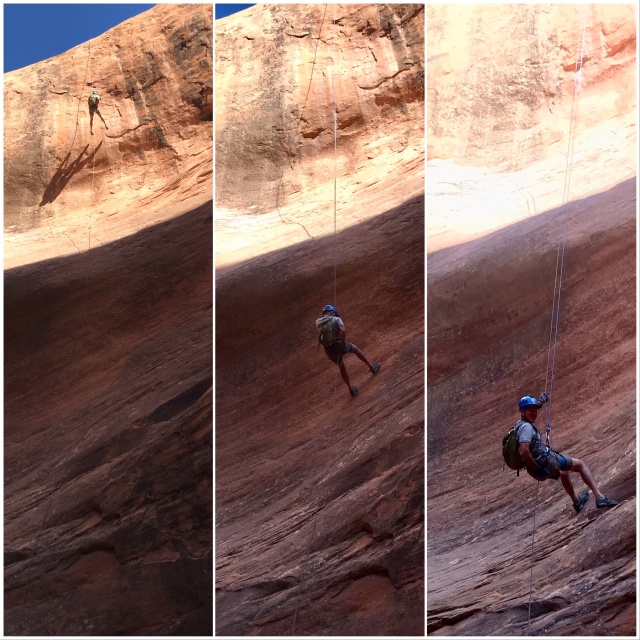 Down at the bottom, we gave each other the “thumbs up.” During the wetter time of year, this area is a pool, hence the name, Pool Arch, but, in early October, there’s no flowing water here.

Having been joined by Alex, we continued our descent and a little further along we did find water, albeit stagnant. We carefully lowered ourselves in, just above the knees, then edged our way around and out.

We continued down the water-carved wash, stemming above another stagnant pool…

… to our second rappel. This one being about 45 feet from a double bolt and chain anchor in the rock.

This time, I went first, swinging left near the bottom to avoid a stagnant pool at the landing. Everyone else followed in quick succession.

We continued our hike through the canyon to our Final Drop (see map in prior post). 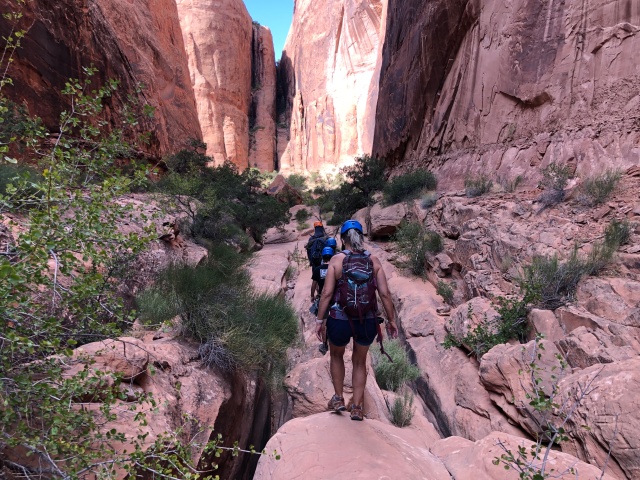 The last rappel was another long one – 110 feet – and a bit more difficult because it was not a straight drop down. First, we had to belay down to a lower ledge and then swing left before descending. Kelly went first, followed by Dakota and then Dale.

In this photo of Dale, you can see how we had to belay down to the left from the top before dropping to the bottom. Again, a standard rappel off the wall, followed by a free rappel, this time, all the way to the bottom.

I followed, then Alex. Thrilled to have been up to the challenge, it was High Fives all around before hiking down into Pritchett Canyon, then back to the car. 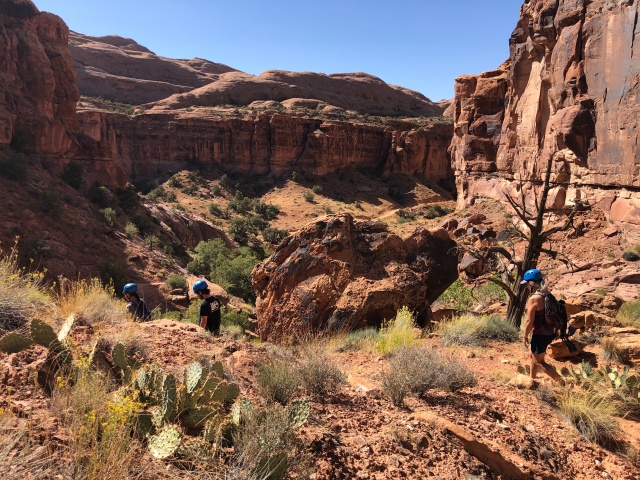 Back at the campground, we thanked Alex, then washed and relaxed before going out for a farewell dinner. The next morning, we said our goodbyes after breakfast. Kelly and Dakota headed back to Colorado and we began our journey back to Washington.

We were ready to get home and pretty much drove straight back, driving 400 miles to the Utah/Idaho border, stopping for the night at Declo, Idaho. Another 475 miles the next day through Idaho and Oregon to Washington wine country, stopping overnight at Prosser, Washington. Another 275 miles the following day and we were back home in Bellingham, Washington. Total travel distance, 4,715 miles.

It was a great trip. Besides being able to spend time with two of our kids (and their significant others) and our good friends, Jim and Von, we loved our adventures in Utah and the Colorado Plateau.

I have a feeling we’ll be back again.