As I previously mentioned, Salisbury has long been a busy crossroads and market town. In fact, it is claimed that the town was first settled as long ago as 500 BC during the Iron Age, although its location then was slightly north of town and the settlement was known as Old Sarum. The settlement was subsequently occupied by the Romans and then the Saxons. I pointed out the ruins of Old Sarum in the photo from the top of Salisbury Cathedral yesterday.

After leaving the cathedral, we drove the mile or so north to visit Old Sarum. The old settlement sat on the top of a hill and was surrounded by a man-made earthen berm dug millennia ago. We drove up the hill and through a breach in this outer berm to the car park.

In 1170, after defeating the Anglo-Saxons at the Battle of Hastings and then being crowned the new English king in Canterbury, William the Conqueror made his way to Old Sarum where he paid off his army and proceeded to build a large Norman stone castle and a royal palace on a rise in the center of Old Sarum, surrounded by a moat and additional earthworks. This is a picture of the site of the Norman castle, taken from within the exterior earthworks, looking west.

We crossed over the moat on a recreated drawbridge…

…into the inner bailey, where we walked around the ruins of the old castle and royal palace.

After crossing the inner bailey to the western side where the royal palace used to be, I turned and took this picture back toward the east. 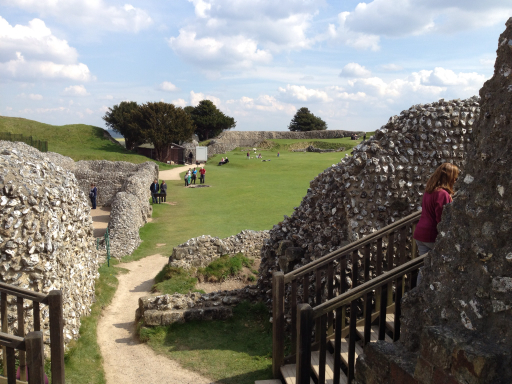 The Normans also built a cathedral here in the outer bailey, but by 1220, life in Old Sarum had become difficult due to the shortage of water (a well had been dug about 250 feet deep) and the clergy and the military garrison stationed here were quarreling over various matters. Consequently, the Church decided to move and build a new cathedral – Salisbury Cathedral – down in the valley and the king decided to let the Church dismantle, remove and reuse the stones from the cathedral, castle and royal palace at Old Sarum for that purpose.

Here’s the remaining foundation of the old cathedral, viewed from the remains of the royal palace: 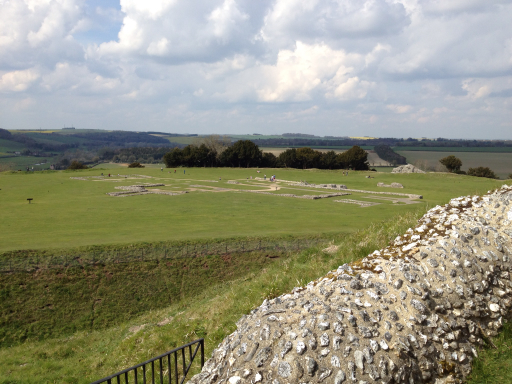 Looking to the south from the ruins of the royal palace, you can see the spire of Salisbury Cathedral off in the distance.