Inside, the Roskilde Cathedral vaguely reminded me of Canterbury Cathedral in England, probably because both cathedrals were converted from Catholicism to Protestantism at the time of the Reformation in 1536: Canterbury to Anglican; Roskilde to Lutheran.

At any rate, in 1536, Danish King Christian III adopted Protestantism as the official religion of the land and confiscated the property holdings of the Catholic Church in Denmark, including Roskilde Cathedral. 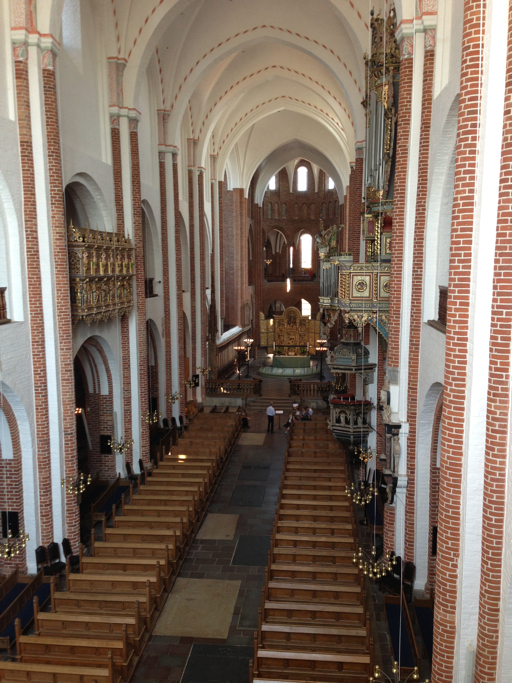 Because Protestantism involved bringing the teachings of the Bible directly to the people, sermonizing became a main feature of the new religious movement, and sermonizing required a pulpit, so some conversion of the cathedral was required.

Christian III (1534-1559) added an organ. His successor, Frederick II (1559-1588) added the pews. But the king that was most intent on making his mark in the material world, Christian IV (1588-1648), added the royal pews, the baptismal font, the pulpit, an alter piece, the twin spires and the entry portico, not to mention an entire, attached chapel intended to serve as his own mausoleum.

Behind the altar is the sarcophagus of Queen Margrete I, recognized as one of the most beautiful works of art in the cathedral. I will spare you the history of the Danes between the time of King Harald Bluetooth (940-86) and Queen Margrete (1375-1412), other than to say that both of these rulers are revered for uniting the Scandinavian kingdoms of Denmark, Norway and Sweden after periods of turmoil and division.

Several other crypts lay behind the altar beyond Margrete’s sarcophagus. We walked upstairs in order to get a better look. Margrete’s crypt is in the very center of the picture. The remains of Harald Bluetooth and his son and successor, Swein Forkbeard (986-1014), are reputed to be buried in the columns that you can just make out on the left and the right in the photo, below, that have full-body portraits painted on them.

[TRIVIA WARNING: The bluetooth wireless specification used by many computing devices is named after Harald Bluetooth, purportedly in honor of his ability to make diverse factions communicate with one another; the bluetooth symbol is a combination of the Nordic runes for his “initials,” the letters H and B).]

The other crypts that you can see in the photograph, below, are also Danish royalty.

In fact, the Roskilde Cathedral is where all the Danish Kings since the Reformation in 1536 have been entombed, together with nearly all of their queens. 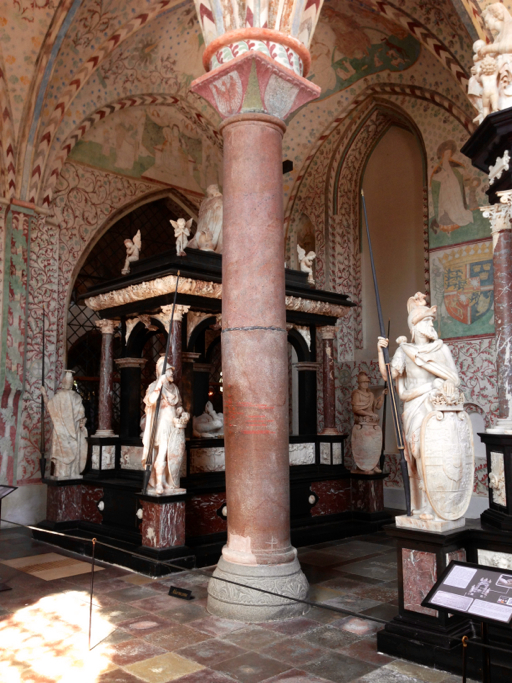 An oddity in this room is the “royal column” in the center, upon which the heights of various kings and royalty were recorded. The highest mark – at 6′ 9″ – is King Christian I, although his skeleton measured “only” 6′ 2″ – still a tall man for his day. Apparently, nobody wanted to be recorded as being taller than the old man, so they gave him a little boost.

In this photo, I’ve converted the original to a side-by-side, black-and-white in order to make the height markings legible. 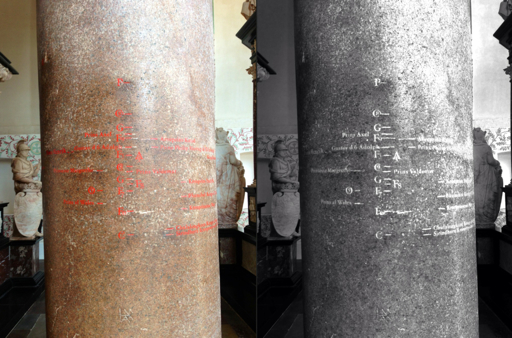 On the other side of the Nave is the Glücksborgian Chapel which contains the remains of the more recent monarchs, Christian IX (1863-1906), Frederik VIII (1906-1912) and Christian X (1912-1942). I took the picture of the crypt of Christian IX and his queen, below, because of the surrounding statuary. If the statue of the woman in the center looks familiar, that’s because it was sculpted by Edvard Eriksen, the artist that also is responsible for the statute of the Little Mermaid in Copenhagen harbor.

The next chapel over is the Chapel of Christian IV (1588-1648); his crypt is the one on the left, behind the one in the foreground.

Christian’s Chapel is adorned with huge paintings depicting important events from his reign, as well as an imposing statute of him.

I’ll have more to say about Christian IV in my next post.