I was mystified when I first started reading the guidebooks before we left for Denmark. It seemed that half the sights that were recommended were “Slots.” At first, it left me thinking that there were casinos all over Denmark: Kronborg Slot, Fredensborg Slot, Frederiksborg Slot, this list goes on.

It turns out that a Slot” is a royal castle or manor house and the three most famous, listed in the paragraph above, are all within an hour drive from where we’re living. So, on Saturday we decided to drive over to see the nearest one, Frederiksborg Slot.

We pulled into the parking lot right behind a wedding party, there for a ceremony in the Chapel. Here’s the walk in from the town:

Frederiksborg Slot sits on the outskirts of modern-day Hillerød, the rail hub for northern Zeeland. The palace complex is situated on 3 islets in a lake to the north of town. The castle’s main entrance is via a bridge…

…over an encircling moat.

Originally, a much smaller complex was built here around 1560 by King Frederick II as his royal palace; hence, the name: Frederiksborg Slot.

When Frederick II died, his son and successor, Christian IV (who had been born in the castle), greatly enlarged the palace buildings, completing construction in 1620. Christian IV, like his father before him, maintained the castle as his royal residence.

Here’s a photo from the inner courtyard of Frederiksborg Slot. 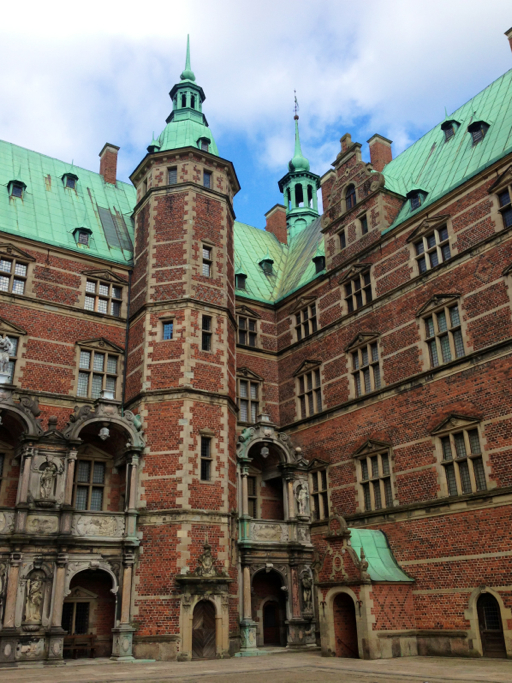 In 1859, a fire destroyed most of the interior of the castle, with the exception of the contiguous chapel, but funds were raised to restore the palace and to convert it to a national museum, which it still is today.

We spent about an hour walking through the various rooms of the palace, trying to get a feel for the history of Denmark from the decorations and exhibits, without much success, due to the meager amounts of information available through the English-versions of the placards and the museum’s iPod audio tour. Thank goodness for Wikipedia and Encyclopedia Britannica on-line.

Since Frederiksborg Slot is the birthplace and Royal Residence of King Christian IV, one of the more popular Danish kings, this is probably the appropriate place for me to let you know what I have found out about him.

Christian IV appears to have been a real Renaissance Man. He spoke Latin, French, Italian and German and studied mathematics, navigation and military command, as well as drawing, dancing and fencing.

He was a great builder, probably the most prolific of all the Danish monarchs. Besides the construction he undertook at Frederiksborg Slot and Roskilde Domkirike, which we have now visited, he was also responsible for a number of building projects in Copenhagen, including the Round Tower (Rundetårn), the stock exchange (Børsen), the Copenhagen fortress (Kastellet), the Rosenborg Castle and at least 3 churches.

He founded a number of towns in Denmark, Germany, Sweden and Norway (including the city that is now Oslo) and, in the Danish town of Helsingør, he completely rebuilt Kronborg Castle into a fortress.

However, he also led his countrymen into two disastrous wars with Sweden, including entry into the Thirty Years War in 1624, all of which cost the country considerable territories, lives and riches.

Encyclopedia Britannica characterizes Christian IV as “a plucky, hard-drinking man of grim wit and great resource.” Wow! How would you like to have that as an epitaph?

Here’s the man in all his splendor. It looks like he was also a fashionista – notice the single braid of hair:

While he looks a little effeminate in the painting and outfit, above, he was a manly man, leading his troops personally in battle and loosing an eye in the process (some of the other portraits of him in the museum were in profile for this reason).

After we finished touring the museum exhibits and palace rooms, we entered the Great Hall which sits above the chapel. We were lucky, there was a choral concert in progress. We stayed for an hour, listening to the rest of the performance. 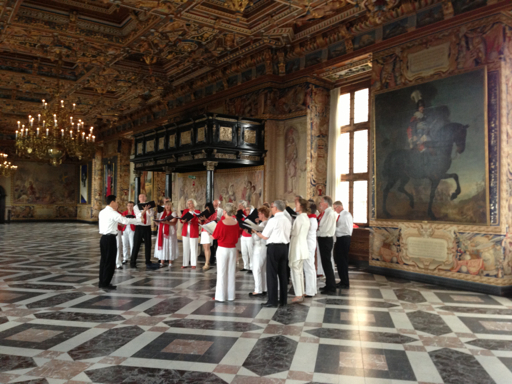 By the time the concert was over, so was the wedding that had been going on in the chapel, below us. So, we went downstairs for a look-see. Between 1660 and 1840, all of the Danish kings were crowned here.

After the chapel, we went back outside to visit the gardens that had been planted after Christian IV’s time, looking back at the castle.

The guidebooks call Frederiksborg Slot the Versailles of Denmark. 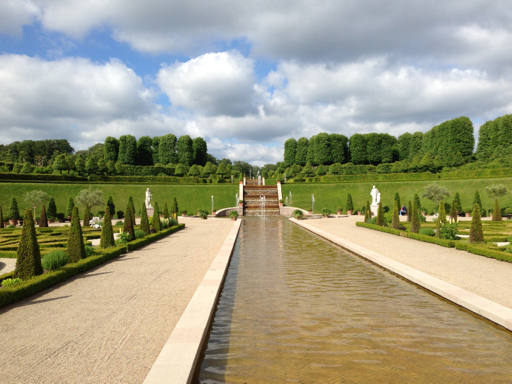 Well, it is a magnificent castle and the gardens do aspire to greatness, but I think that comparison might be going a little too far.

Nevertheless, it is the largest and most ambitious royal palace in Denmark and we thoroughly enjoyed our visit.