Being in a Viking mood, we headed toward Jelling after leaving the Fyrkat ring fort, arriving in Jelling in the late afternoon.

Jelling is a small town today in the heart of Jylland, Danish Jutland, and there’s really only one reason to stop there: Jelling is the birthplace of Denmark, the place that Gorm the Old, the first Danish king, made his royal seat and where his son, Harald Bluetooth, adopted Christianity for himself and his people.

[As an aside, the Vikings did not have surnames, so they adopted nicknames that were either descriptive, humorous or in jest. Thus, Harald might have had a blue tooth and Gorm was probably, um, not a spring chicken.]

King Gorm the Old ruled from 936 to 958 A.D. His wife, Thyra, was credited with the construction of the Danevirke defensive works that separated Denmark from the rest of Europe to the South. She died sometime in the mid-900s and Gorm built a burial mound in her honor. When King Gorm later died, a similar burial mound was constructed for him.

…to take a picture of the church that now sits between the two mounds.

Originally, a “stone ship” was placed between the mounds, but when Gorm’s son, Harald Bluetooth, took the throne in 958 A.D., he converted to Christianity and built the first church in Denmark where the stone ship monument had been. The church you see in these pictures was built on the same site around 1100 A.D.

Because no remains were found in either of the two burial mounds when they were explored in the 1800s, it is thought that Harald moved and reinterred Gorm’s remains under or near the church where bone and relics were found during an excavation of the site in the 1970s.

When Harald reinterred his father, he erected a stone monument to commemorate the event. That stone (the one on the right) is one of two “Jelling Runic Stones” in this park-like setting; the other (on the left) being a rune stone erected by Gorm in memory of his wife, Thyra. 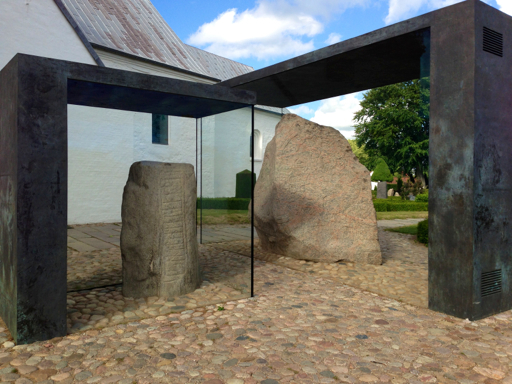 It was a Viking tradition to raise a rune stone as a memorial to a great person. These stones were then vividly painted, but, of course, all the paint on the Jelling Stones, erected before 1000 A.D., has long since disappeared.

Runes are the letters that make up the alphabet of the old Norsemen. The version that the Vikings used consisted of 16 letters and read right to left.

This is the one that King Gorm erected in memory of his queen, Thyra (Gorm’s burial mound is in the background). It reads:

“King Gormr made this monument in memory of Thyrvé, his wife, Denmark’s adornment.”

Rune Stones did not have to just contain runic writing, however. They could also depict characters and events, such as the Jelling Stone erected by Harald Bluetooth, below, depicting a serpent wrapped around a lion. 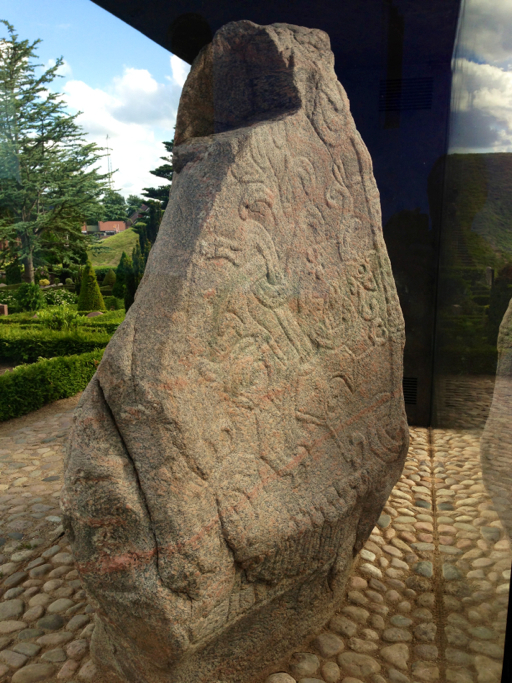 On the flip side of Harald’s Jelling Stone is the following (translated) inscription:

“King Haraldr ordered this monument made in memory of Gormr, his father, and in memory of Thyrvé, his mother; that Haraldr who won for himself all of Denmark and Norway and made the Danes Christian.”

How about that, Boo-Boo? That Harald Bluetooth wasn’t just your average bear.