Saturday morning found us in the oldest city in Denmark, the medieval town of Ribe. Supposedly, the cobblestone streets we walked along date from 869 A.D. I felt guilty driving and parking on such ancient artifacts. 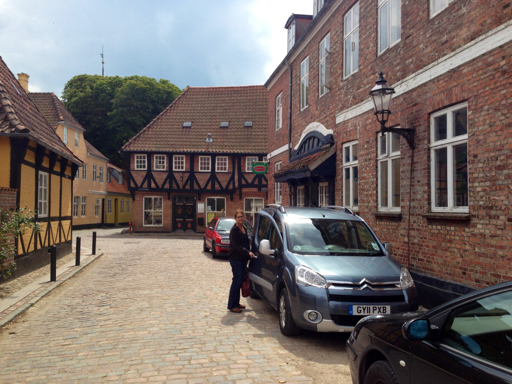 We started by walking through the Torvet, the market square, down the pedestrian shopping street, stopping for coffee, then we turned around and headed back towards the cathedral. 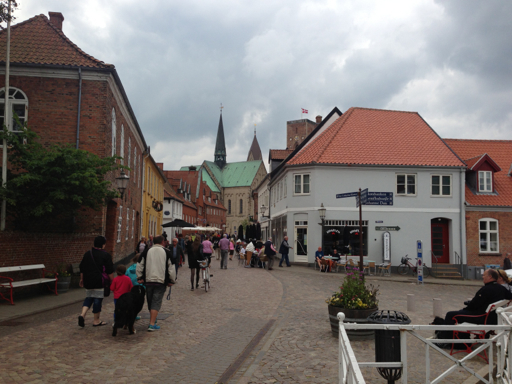 Ribe was originally settled as a thriving Viking trade center, the place where the Frankish empire on the European continent traded with Scandinavia. This settlement of craftsmen and merchants grew up along the river known as the Ribe Å that flows through the town into the North Sea.

Looking West along the Skibbroen, the Quay, you can see where the ships docked, as they still do today, on the Ribe Å. Down river, the land is marshy, but when drained it makes for good farm land. 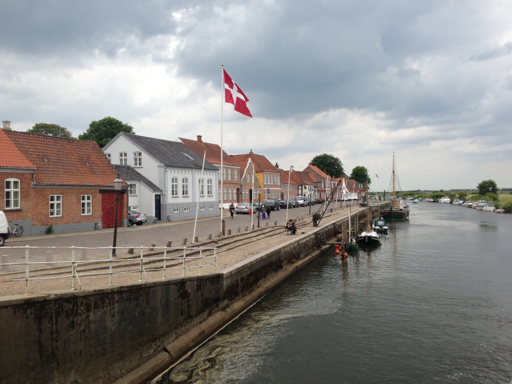 There are a number of weirs, sluices and water wheels controlling and feeding off the river in the town, which created tension between the townspeople and the farmers in years past when the water levels were raised or lowered to control for flooding or to drive the mills. 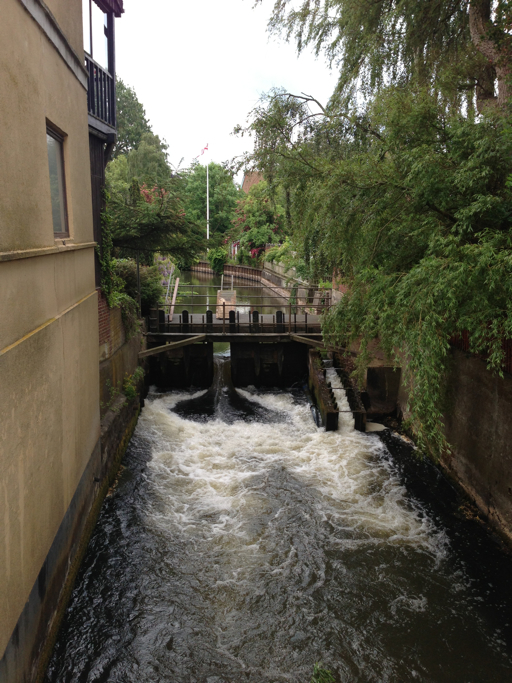 The town of Ribe went through a number of changes in its formation as the population grew. But, due to floods, fires and an economic downturn, by the 1600s, the town began to decline.

As it turns out, that was a fortunate thing because it resulted in the many medieval buildings remaining undisturbed for centuries until, around 1900, a preservation movement began that ultimately resulted in over 100 properties being designated historic and preserved. 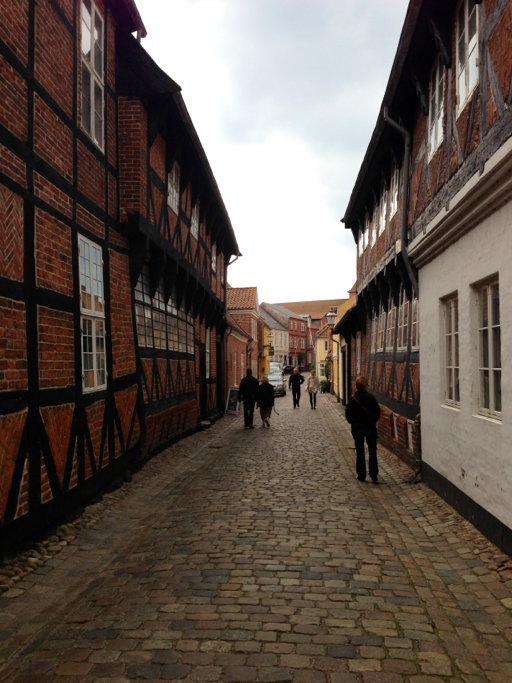 Most of the buildings in the city center today – like those in the picture above – were built in the 16th and 17th centuries, using a construction style known as “half-timbered” where the wooden beams are load-bearing with the plaster or brick used as filler.

If you look closely at the picture below, you can see that the building on the left, above, dates to 1681; and it’s still being lived in! By the way, that’s a stork nest on the pole at the top of the photo. 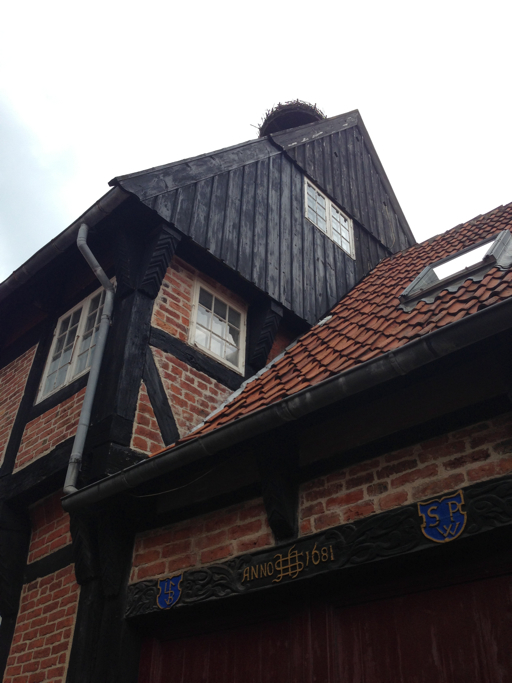 But Ribe is just as famous for its cathedral as it is for its preserved city center.

As a Christian religious site, Ribe dates back to at least 948 A.D. when the first Catholic bishop arrived, and bishops have cathedrals. But, the cathedral now standing was mostly built or rebuilt in 1150 A.D. when the Danish royalty had a presence here and was able to fund the construction, making it the oldest cathedral in Denmark.

Here’s a view of the back side of the the cathedral, its East end. 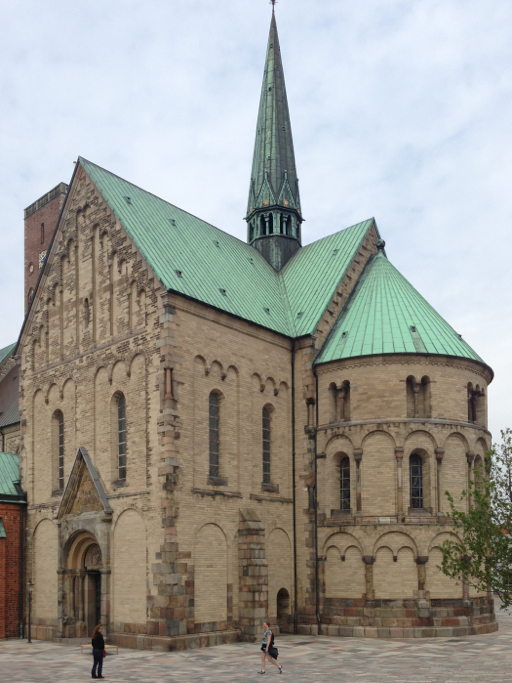 The cathedral was built more or less in the traditional layout with its nave running West to East and its transepts running North/South, making the shape of a cross with its top facing East toward the rising sun/son. But this cathedral was built without the typical chancel section East of the crossing of the nave and transepts, resulting in a blunt eastern façade. In architectural style, the cathedral is Romanesque.

We walked along it southern side where you can see the various building materials used in the original construction, as well as in its reconstruction. 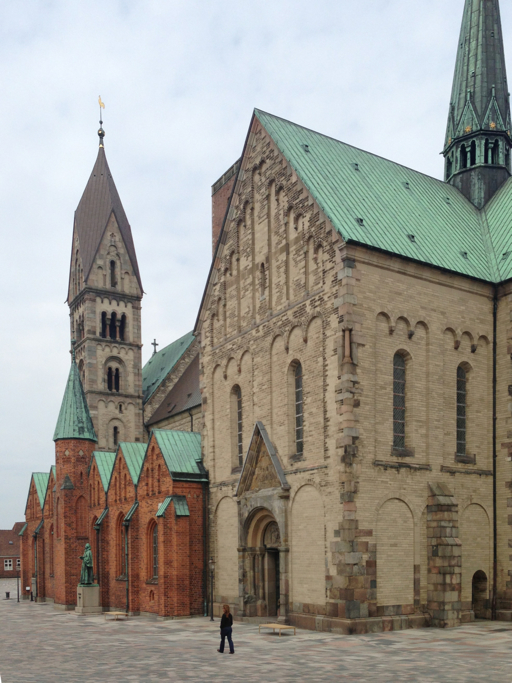 The foundation of the cathedral was built of Danish granite, but the walls were constructed of tufa stone, quarried along the Rhine near Cologne, Germany, and sailed to Ribe. Sandstone was used for various decorative features.

Although the main entrance to the cathedral is its western door, the portal into the southern transept is the most decorative: 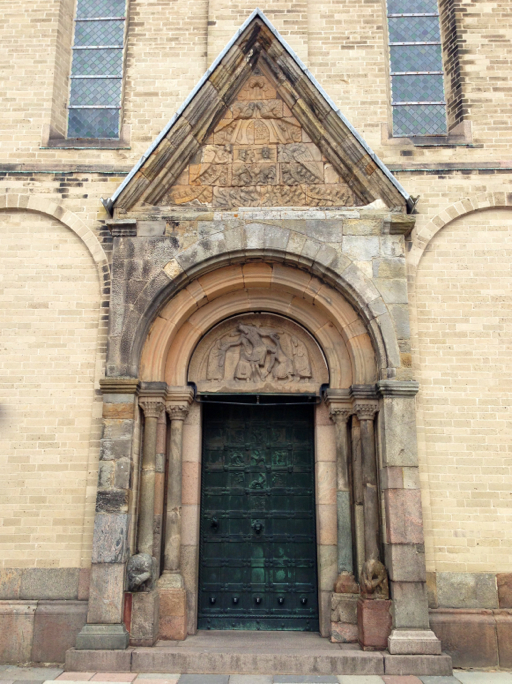 We worked our way along the southern side of the cathedral, back to the West where we had parked. This is the front of the church. 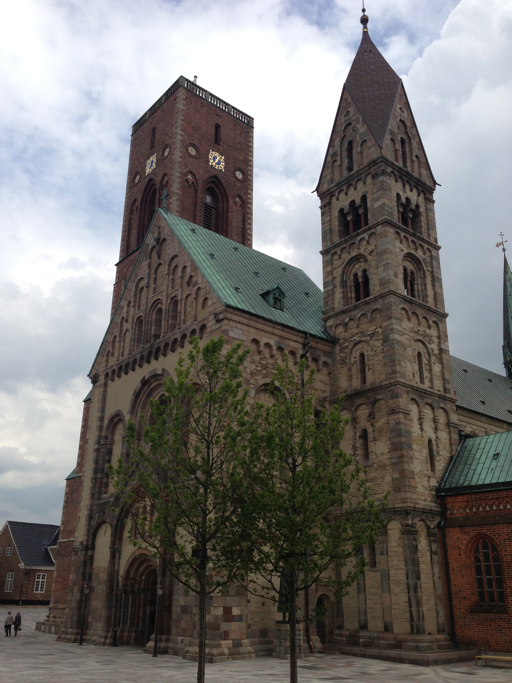 Looking up, we were immediately struck by the fact that the two spires were so different from each other (on most cathedrals, they are identical), the one on the right being Romanesque, like the rest of the cathedral, the one on the left being Gothic.

Here’s the story: Originally, the towers were identical, built between 1200-1225 A.D., at the same time, though a little after the completion of the main church. However, on Christmas Day, 1283 A.D., the north tower (the one on the left) collapsed, killing a number of people. I don’t know about you, but that might have made me question my faith, if I had been there, and if I had been a Catholic.

Anyway, the tower was rebuilt in 1333, complete with a spire, through a partnership between the Church and the town, with the town maintaining the right to use the top as a watchtower. In 1594, the tower collapsed again, but this time, only the spire and a small part of the top of the tower fell. By 1610, the tower had been repaired, but without the spire. During the war between Denmark and Sweden in the early 1600s, the town mounted cannons on the top of the Gothic tower and they were actually fired and fired upon.

As you can see in the pictures, the day got progressively darker and more ominous, so we decided to go inside the Museet Ribes Vikinger, the Viking museum. It was a great museum and we spent about two hours there before calling it a day and heading back home to Hald.