The weather while we’ve been in Seattle has been pretty much what we expected, although it was unseasonably cold when we first arrived a little over a week ago, hitting the 20s for a few days. And we’ve adapted pretty well, staying inside when it rains and enjoying the outdoors when it doesn’t. So, Thursday looking rather cloudless, we decided to head out as tourists to see Seattle.

We started with an early lunch at Chinook’s, followed by walking the docks at Fisherman’s Terminal. 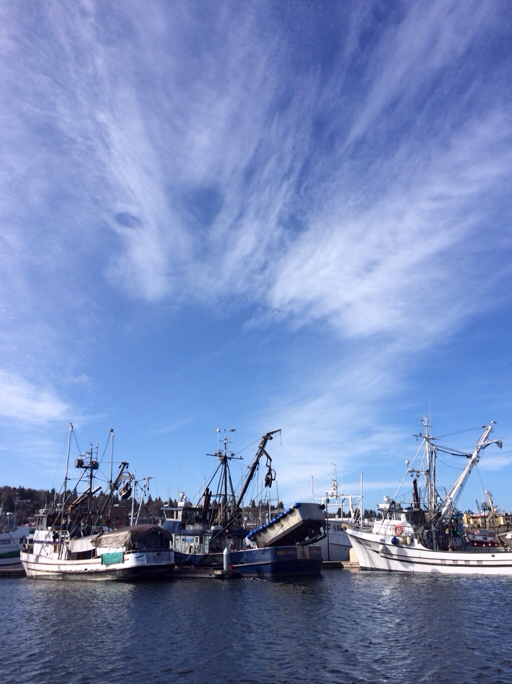 Next stop, the Space Needle, built in 1962 for the World’s Fair held here that year; it’s just over 600 feet tall: 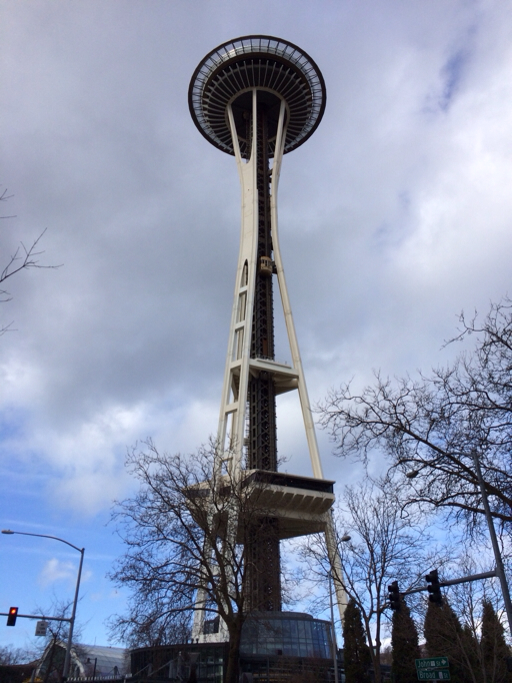 When it was built a little over 50 years ago it was supposedly the tallest building west of the Mississippi River. There’s a 360° observation deck at the top of the Needle and the views are spectacular on a sunny day. 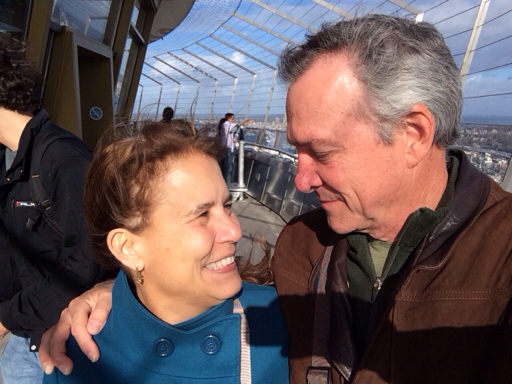 Looking to the South, here’s the downtown Seattle skyline: 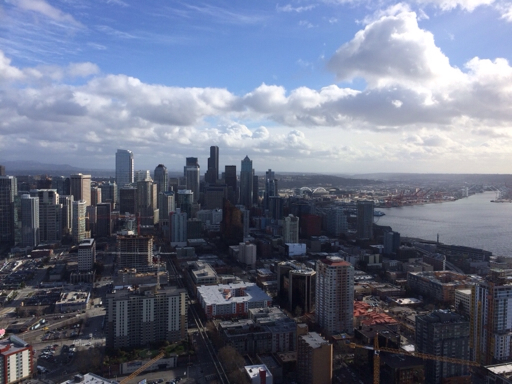 Over on the other side of the observation deck, looking North into Puget Sound, we were surprised by a floatplane flying by (just above the clouds on the right): 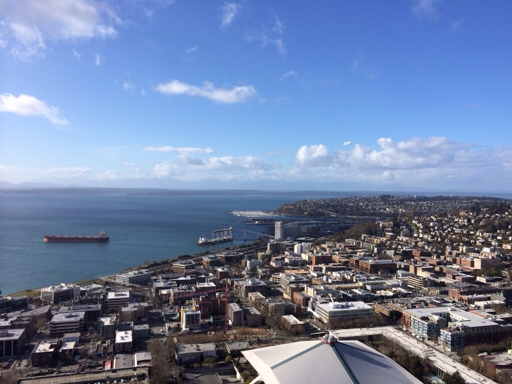 Next, as all tourists must, we visited Pike’s Market on the waterfront. 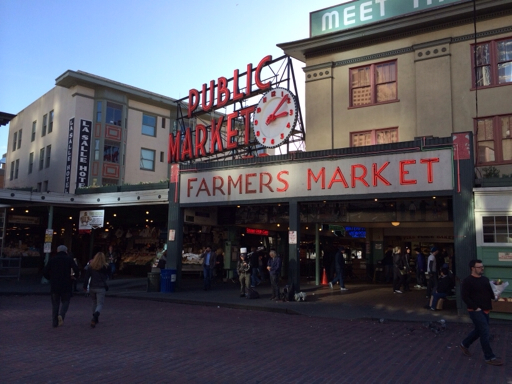 The seafood selection is second to none. And though we certainly have a surfeit of ocean fare in Florida, we prefer the seafood from the colder northern waters around here and brought in from Alaska,… 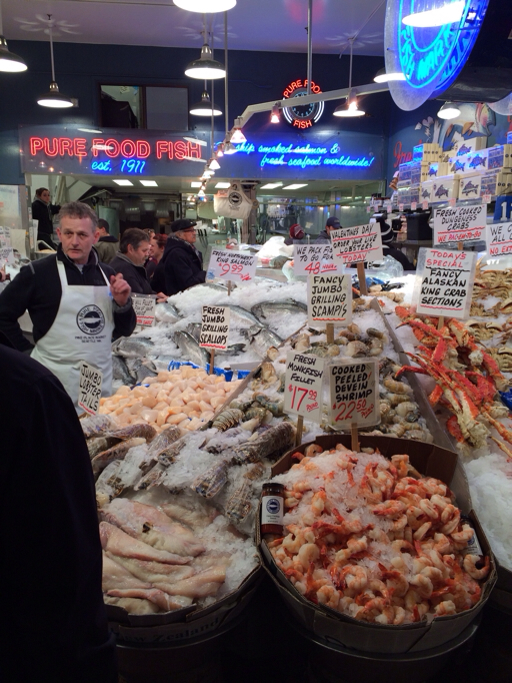 …especially the salmon and the local Dungeness crab: 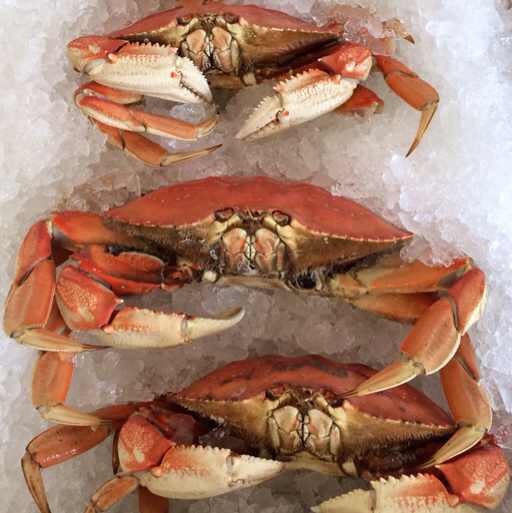 We walked along the Seattle waterfront on a pilgramage. 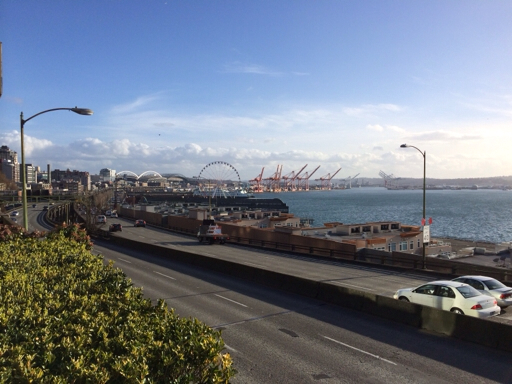 We were in search of the Original Starbucks Coffee shop. Coffee is a religion in the Pacific Northwest and the High Priestess is Starbucks. Started in 1971 and still based in Seattle, Starbucks is now the largest coffeehouse company in the world, currently with 20,891 stores in 62 countries, including 13,279 in the United States; in our travels, we’ve probably visited more than a hundred of them. Here’s the store in Pike’s Market that most people believe is the first Starbucks cafe. I’m sure there’s always a crowd waiting to get in. 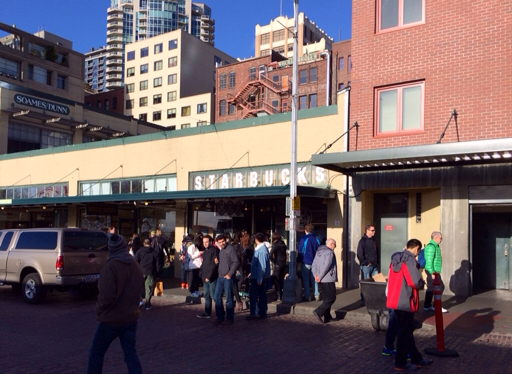 And here’s another Fun Fact about Starbucks: the company was named after Starbuck, the chief mate of the Pequod, Capt. Ahab’s ship in Moby Dick (one of my favorite books, by the way).

On the way back to Ballard, we stopped to see the Ballard Locks (officially, the Hiram M. Chittenden Locks), one of the busiest lock systems in the United States. If you look closely at the picture, below, you can see the size of some of the ships that move through these locks from Salmon Bay, Lake Union and Lake Washington into Puget Sound and the Pacific Ocean beyond. 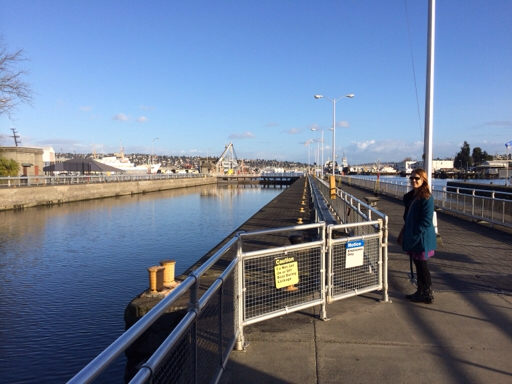 The system, in use since 1916, consists of two locks: a large one for more commercial vessels (80′ wide and 825′ long); and, a smaller one that seems to be geared for recreational boats and fishing vessels (30′ wide and 150′ long). There’s also a spillway to maintain the level of the lakes, which can be as much as 26′ higher than the Sound, complete with a fish ladder used by spawning salmon. 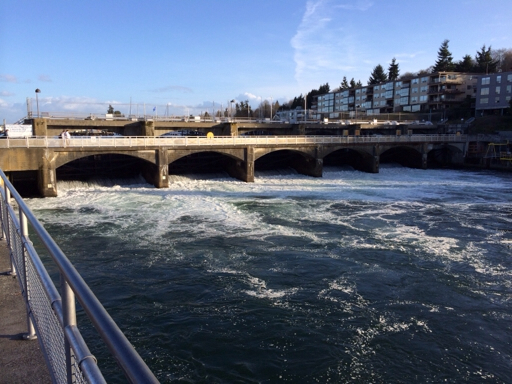 It was fun playing tourist for the day.