After learning that the two big modules had been transported to Mount Vernon for the final move and set the following day, we decided to drive down to visit. It was a little odd seeing the house in pieces on trailers in a field: 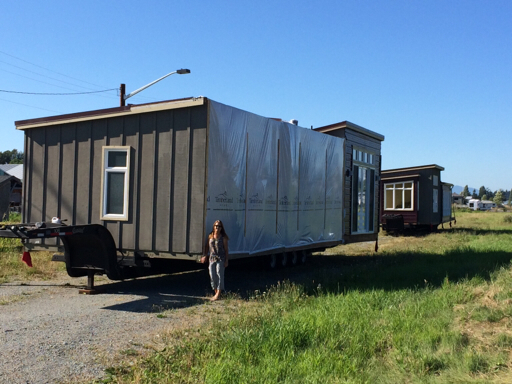 We had scheduled everything to start at 9:00 a.m., July 30, the day before our anniversary. The crane arrived around 7:30 a.m. and began the process of setting up.

At 9:00 a.m., right on schedule, the two largest modules arrived. It was quite an operation. The transport crew had to lift several telephone and cable wires so the trucks could make it up the hill to our lot. We had one heart-stopping moment when one of the modules brushed the bottom on an electrical wire – I was waiting for sparks to fly, but nothing happened, thank goodness. 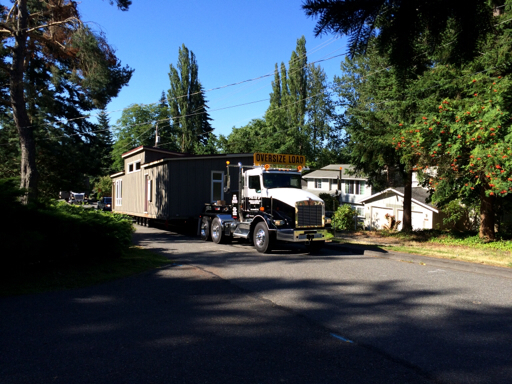 Unfortunately, the crane crew neglected to bring the correct staging gear, so the crane didn’t get set up and ready to go until after 11:00 a.m. (in spite of having them check the site twice beforehand to avoid this problem). So, for two hours I fretted over how much this mistake was going to cost us (turned out to be $1,200) since we were paying everybody to stand around waiting on the crane – 5 men from the “set crew,” my contractor and 2 of his carpenters, and the finisher from the house builder – quite a mod squad! At any rate, the crane company eventually sent up the right equipment and the crane was ready to go. 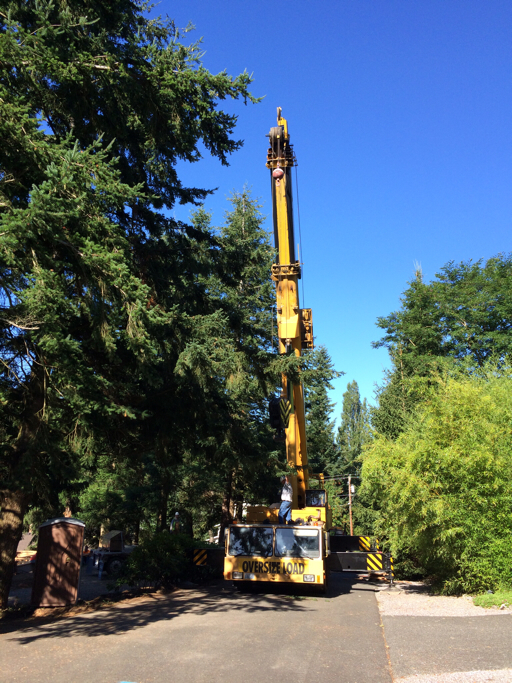 The crane was a 180-ton mobile crane with a 135-foot boom (the boom is not fully extended yet in the photo, above). To finish setting up the crane, the crew had to extend outriggers about 10 feet on either side and then load a 60,000 lb. counterweight behind the boom.

After getting the crane set up, the entire mod squad assembled the belts and spreader bars needed to lift the modules. 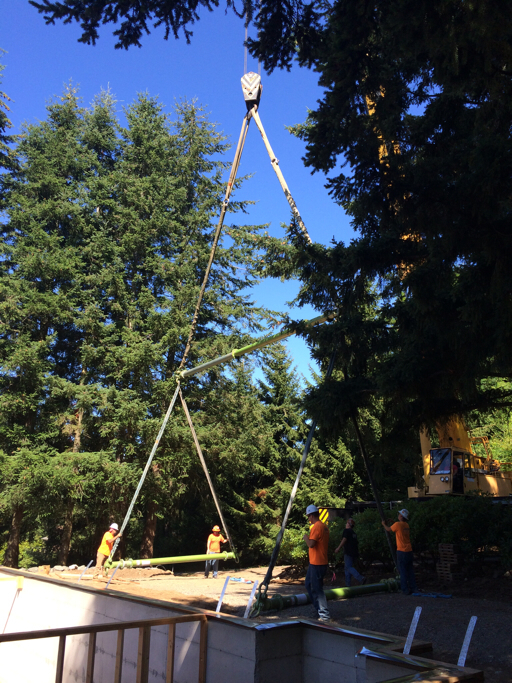 All set to go, the first module was backed up the hill to the crane, straps were run under it, and up it went. 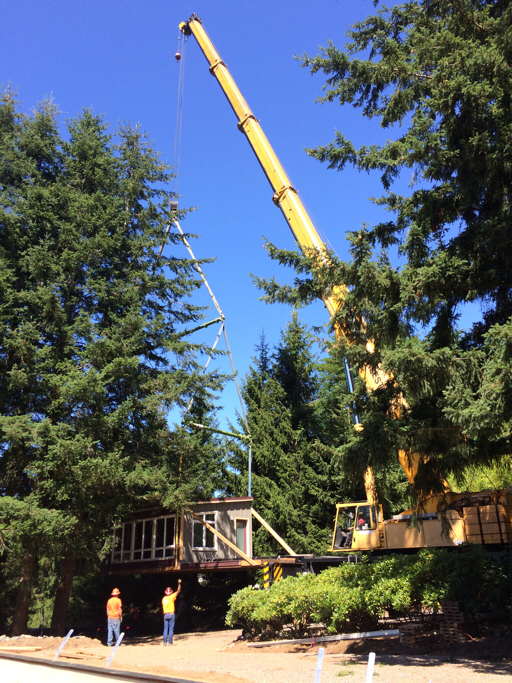 This first module was the most challenging for the crane operator, even though it wasn’t the heaviest. After lifting the module off the transport, it was carefully guided through the trees toward the foundation. 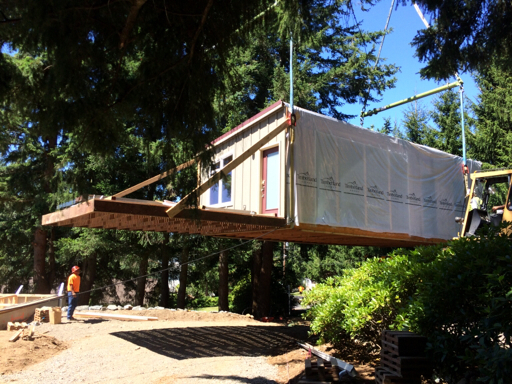 In the photo, below, you can see the fully extended crane boom. Every bit of that height was needed to lift and set the first module on the southern side of the foundation. And we just made it! 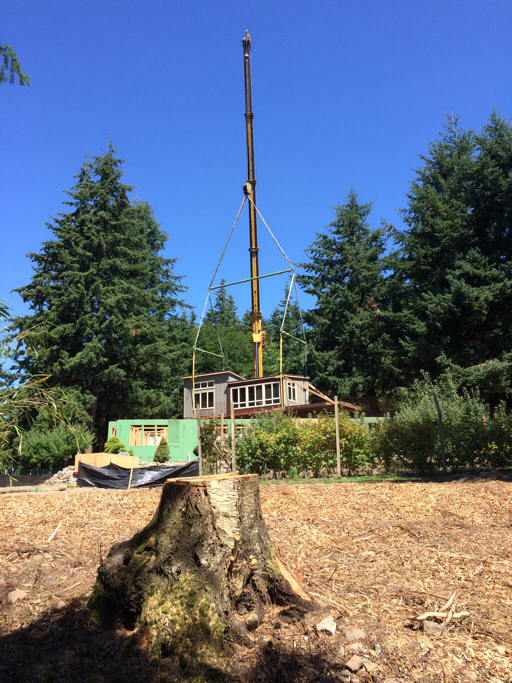 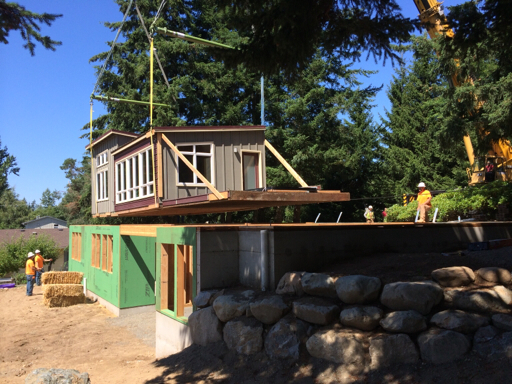 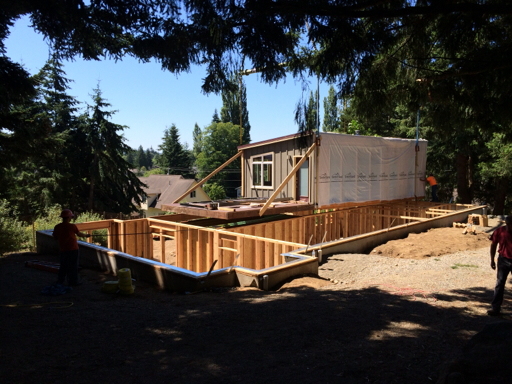 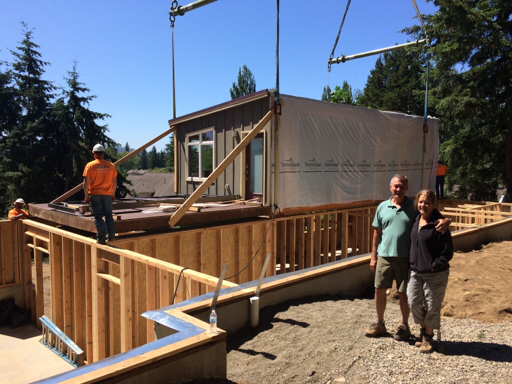 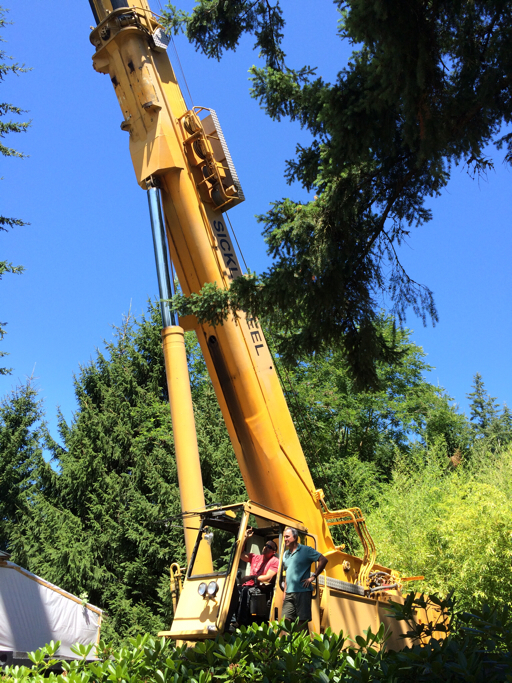 And, with a little coaxing from the mod squad, the second module was quickly set in place. 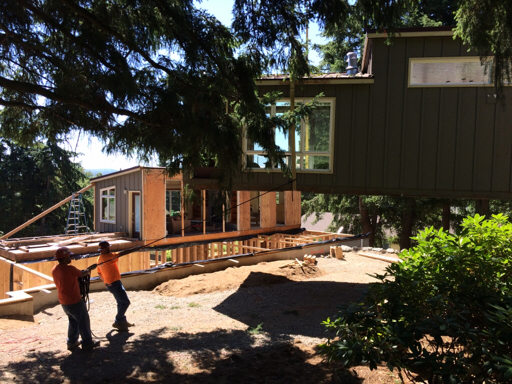 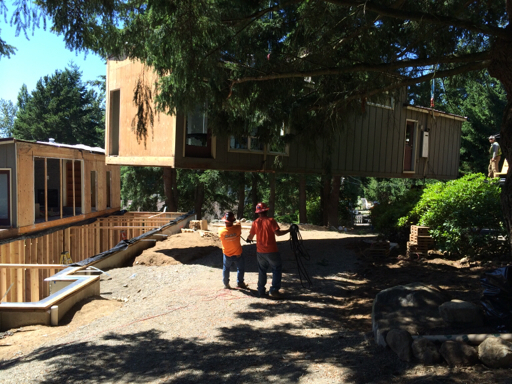 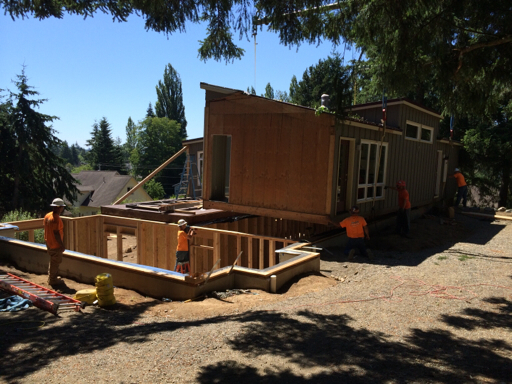 We were surprised when the set crew used come-alongs (above) and giant crowbars (below) to make the final adjustments before bolting the first and second modules to each other. But, we were happy to see that the house fit perfectly on the foundation. In fact, the foreman of the set crew commented to me that in his 20 years of setting modular homes, this was the best foundation he had seen – quite a compliment to Rob and his crew and subcontractors.

The third (and final) module presented special issues. Although smaller than the first two, it had to be lifted up and over them to be set on the far side of the foundation and then placed perfectly so it could be bolted to the ends of the other two modules. There was no room for error and no room to get the straps out either – the straps were going to have to be cut, trimmed and left in place between the module and the foundation. 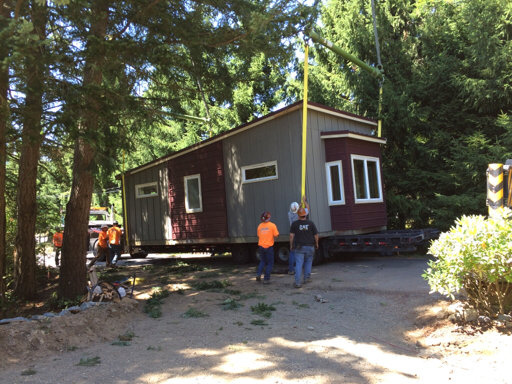 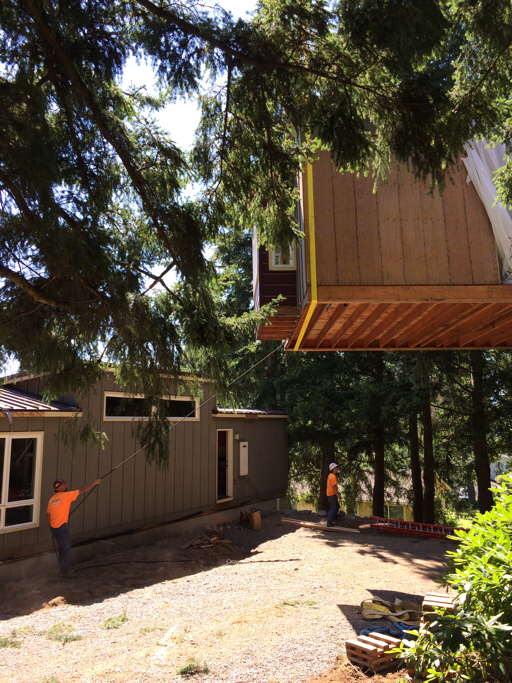 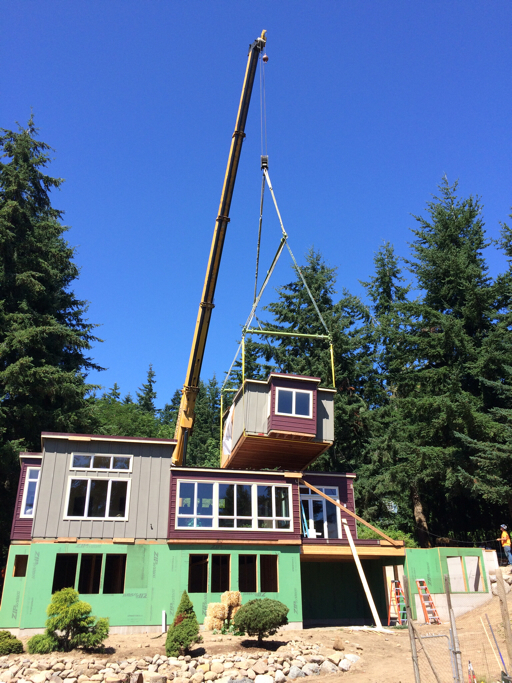 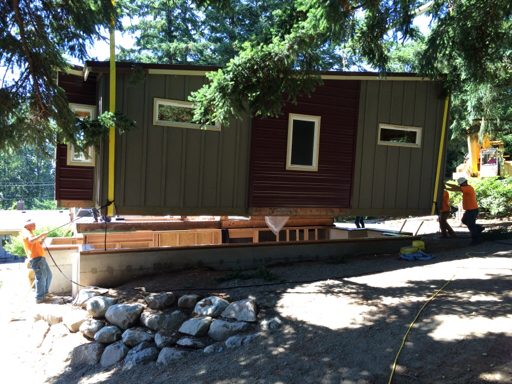 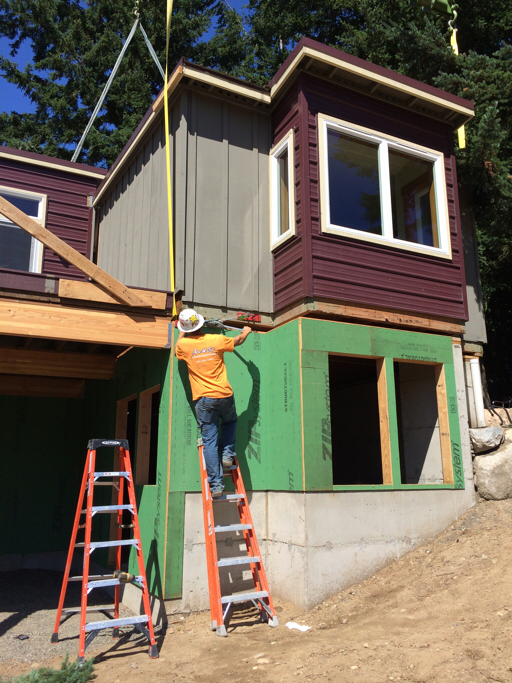 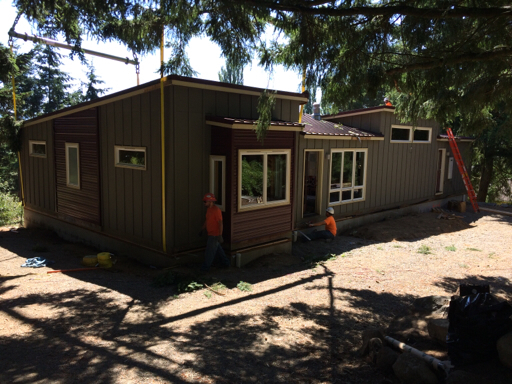 And here’s the finished product. The entire operation (once the crane got going) took 5 hours, including bolting all the modules to each other. 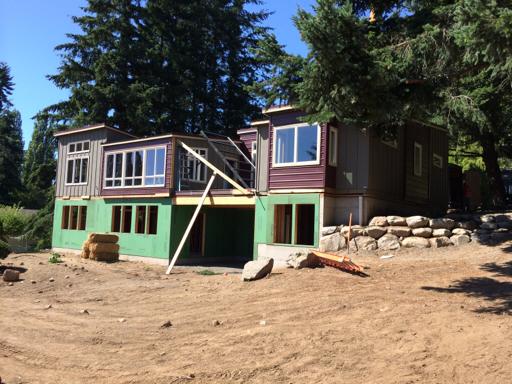 A nice anniversary present to ourselves!