With the house now on its foundation, it was time to get to work finishing the 1/3 of the basement that will house Dale’s ceramic studio and my workshop; the other 2/3 of the basement will remain unfinished storage space, technically a “crawl-space,” although it could easily be finished living space someday. Here’s a photo from the storage area, looking into the studio/workshop side, well lit by natural light through the windows along the south wall: 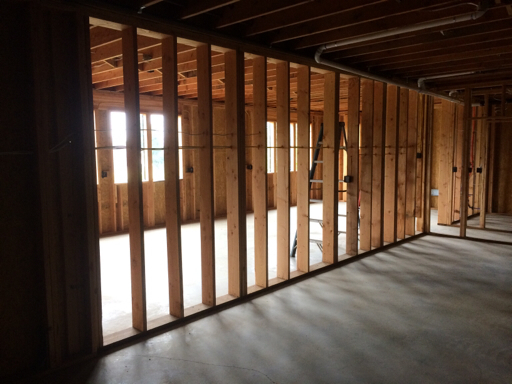 The plumber and electrician were the first to show up at this stage of the project, connecting the house utilities to the drains in the foundation and to the water main and electrical drop from the street. Another subcontractor installed the gas lines and, as the subs were finishing up, one of Rob’s workers, Mike, installed the in-floor, radiant heat tubing in between the floor joists (the red tubing in the photo, below). It was a real spider’s web of pipe, conduits, wires and tubing. 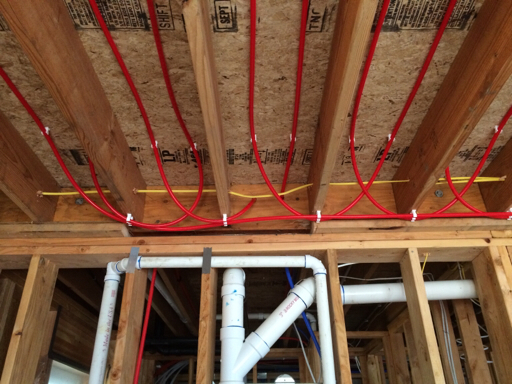 Once the electrical, plumbing, gas and heat work was done and the windows installed, another subcontractor installed the insulation: batt between the basement ceiling and the house floor, as well as in the interior walls, and blown-in foam for the exterior walls. 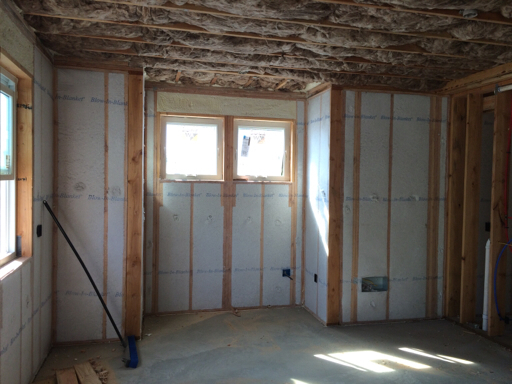 With the insulation finished, the drywall subcontractor brought in his supplies… 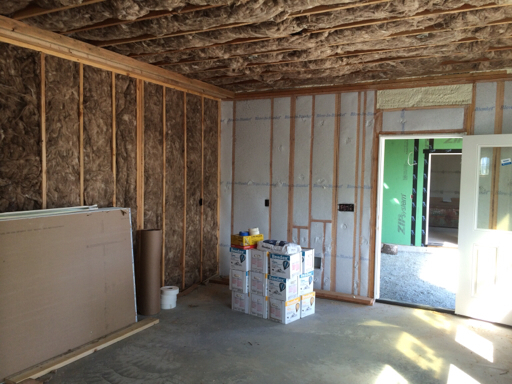 …and quickly lined the walls and ceiling. This is the studio/workshop, looking east: 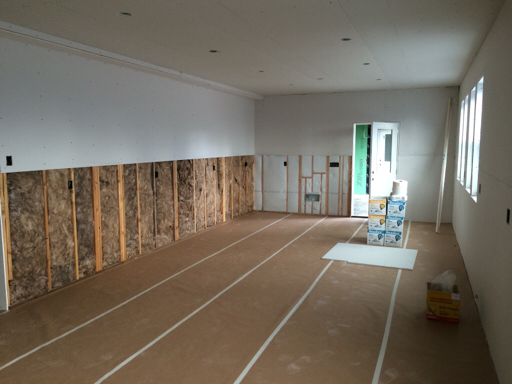 And, again, looking west. Dale will have a kiln in the alcove at the end. Her work table will be on the left, under the windows, with a sink and shelves for glazes on the right; my workbench will be on the right, too, along the wall where the drywall work has not yet been completed. 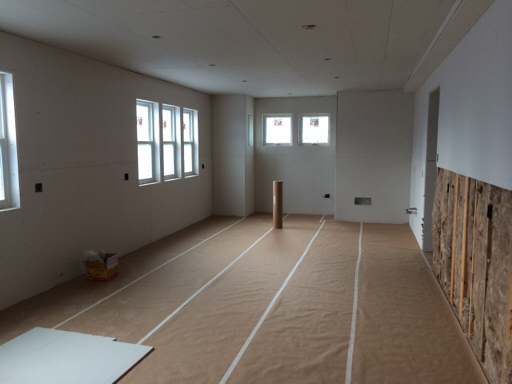 While waiting for the drywall to be finished, textured and painted, we worked in the backyard clearing and leveling, spreading mulch and gravel for garden beds and paths, and collecting rocks. 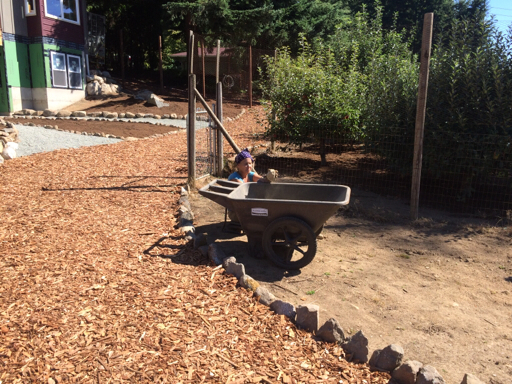 Once again the deer came nosing around as we had a perimeter fence installed. Here’s one checking out the gates. 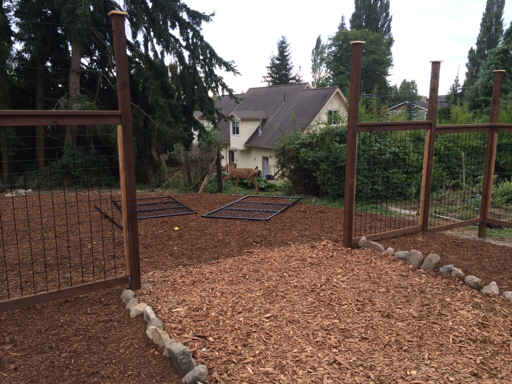 We have several deer each and every day on the property and we’ve left them a path along the east side of the house so they can continue their daily trek from Big Rock Garden Park, above us, down to Whatcom Falls Park, below. But the deer play havoc with landscaping; hence, the 8-foot high perimeter fence around the backyard.

One of Dale’s favorite things to do is feed the deer any bruised or worm-riddled apples. The deer love her. 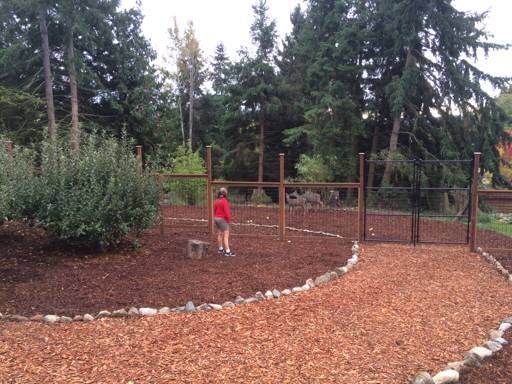 By September, we were getting anxious for Rob to finish the siding since the interior of the basement was nearly done. Here’s Rob’s foreman, Luke, putting up the Hardi-board. 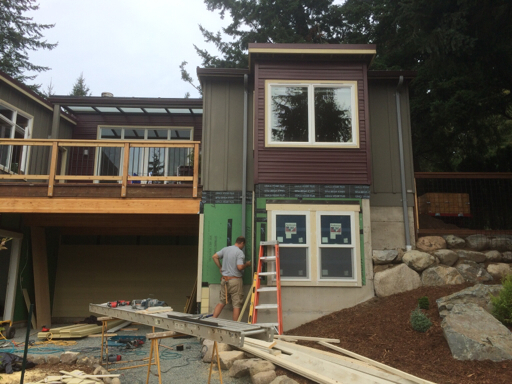 Although the house has vertical board-and-batten siding, we decided to do the basement in horizontal lapstrake for contrast. 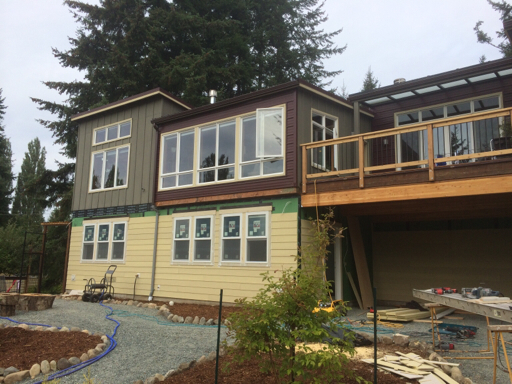 Inside, Mike returned to install the on-demand, gas water-heater (on the right) and the open-loop, radiant floor heating panel that he custom built: 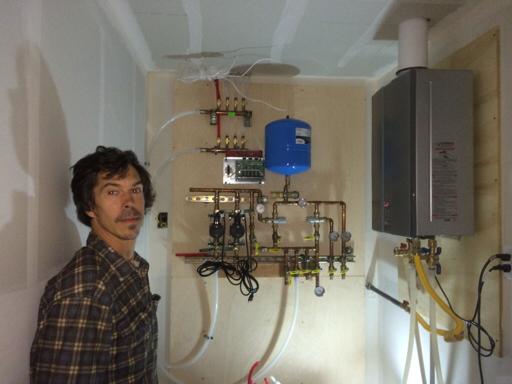 Before painting the exterior, we had an asphalt company grade and contour a driveway in the front of the house and a parking area on the side… 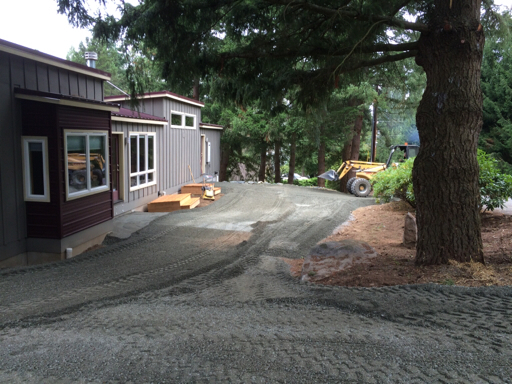 …and then pave it. Here’s the side parking area marked out: 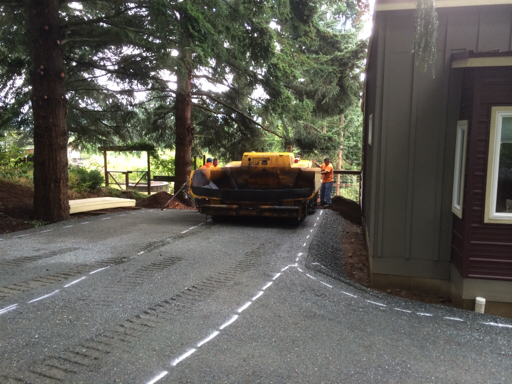 The asphalt machine crept along as it was continually fed by a dump-truck. The steaming asphalt was hot as hades, but that didn’t deter the crew from paying attention to the details. 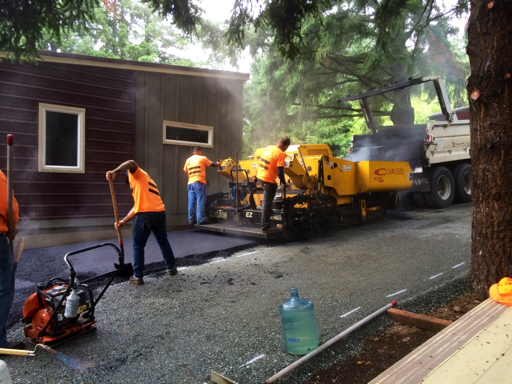 The side-yard parking area is wide enough for two cars, so they had to make a second pass… 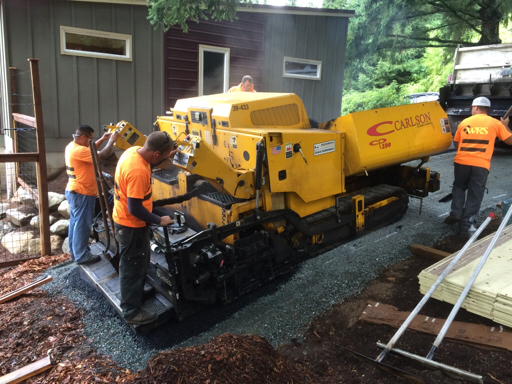 …before making their way around to the front…

…where we have built a circular drive: 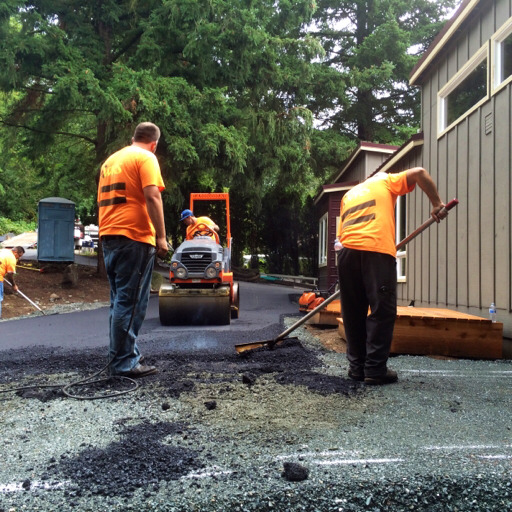 The driveway and parking area were graded one day and paved the next and it really finishes the place. But we’re right down to the wire trying to complete everything because we need to get back to Florida by the beginning of October in order to unhurricane-proof the house for a home exchange. Just a couple more details and we’ll be done.