Everybody has heard of Munich’s Oktoberfest, but did you know that it has a rival in the Spring? Well it does: the Stuttgarter Frülingsfest, also known as the Cannstatter Wasen, held every year in Stuttgart between the middle of April and the end of May. Its the largest Spring festival in Europe! And we were going this year, thanks to Jörg and Heike!

Many of the attendees wear traditional Swabian costume and our family went in full regalia. Here are Jörg in his meisbacher jacket (I think I got that right), Heike in her dirndl and Christopher in his lederhosen – all dressed up and looking for a beer garden. 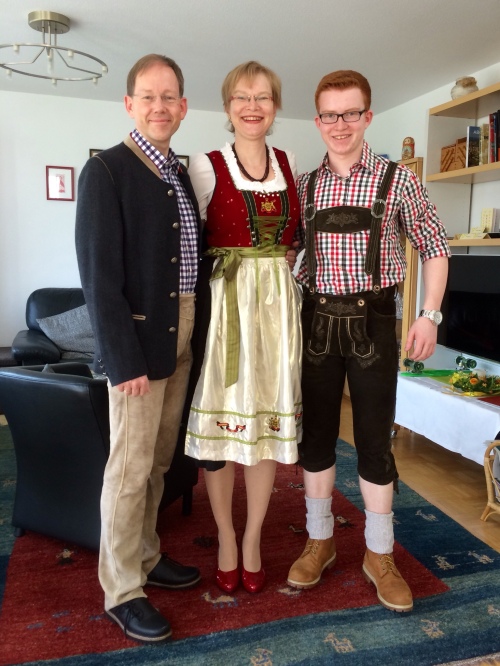 By car, Schönaich is about a half hour south of Stuttgart, so we drove to the festival, attempting to beat rush hour. People were just starting to stream in when we arrived. The festival is similar to a county fair in the U.S., but with more beer, obviously. 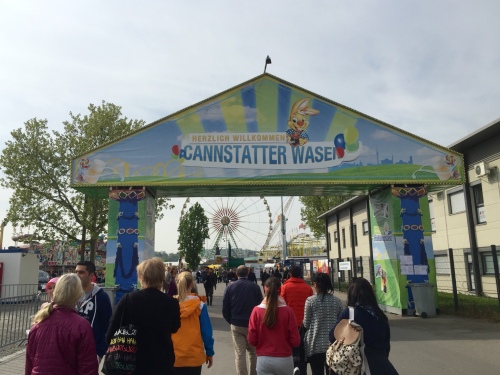 Our first order of business was to go up in the ferris wheel to get a better view of the surrounding area. 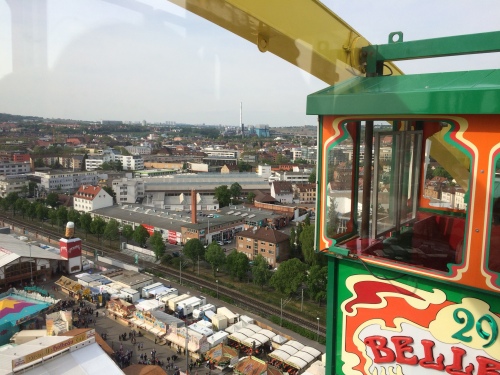 That’s the Mercedes Museaum in the distance, just left of center, and the Stuttgart football (soccer) stadium to the left. They are crazy about their soccer team here, especially Dorothea (and especially about #44), even though the team doesn’t normally do very well. Christopher roots for the perennial winner: FC Bayern München (Munich). 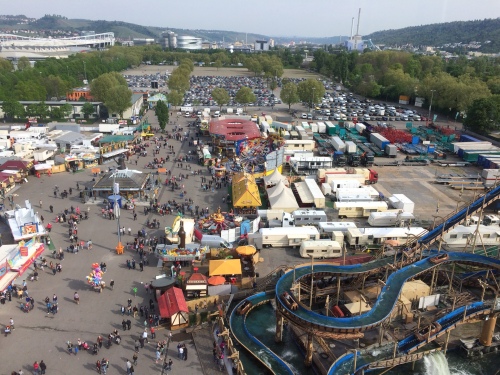 After the ferris wheel, we made our way over to the big tent where Jörg had made reservations so we could all sit together. The beer was immediately on its way to the table. 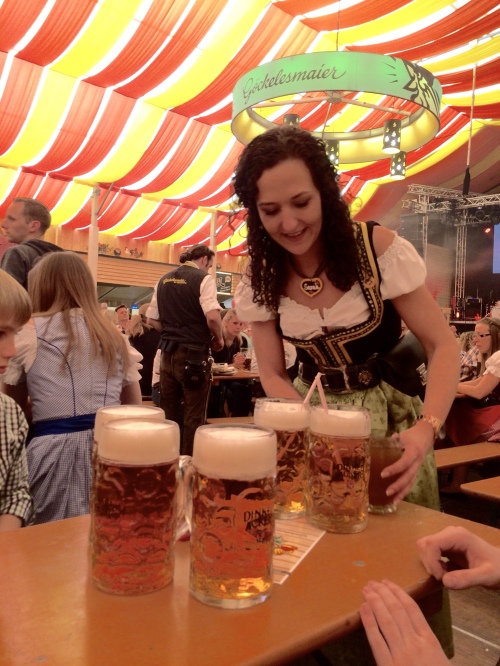 Christopher took a picture of our first toast: Prost! 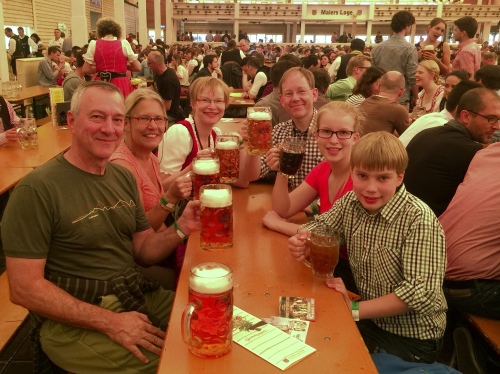 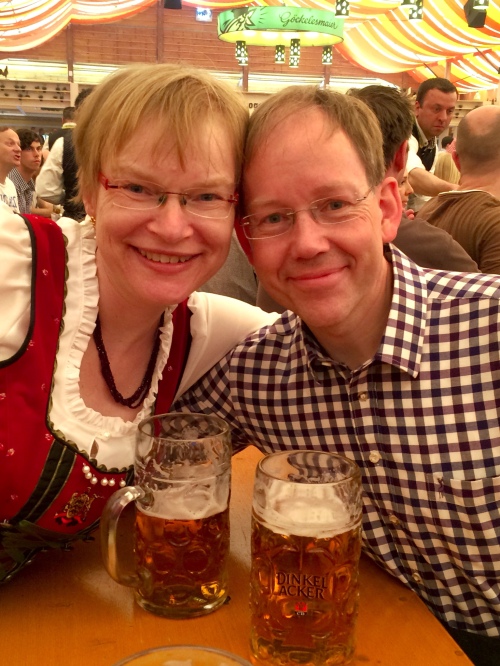 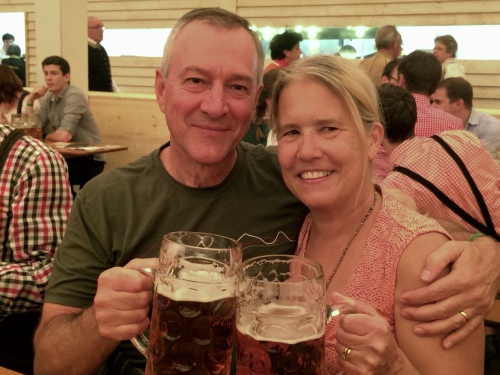 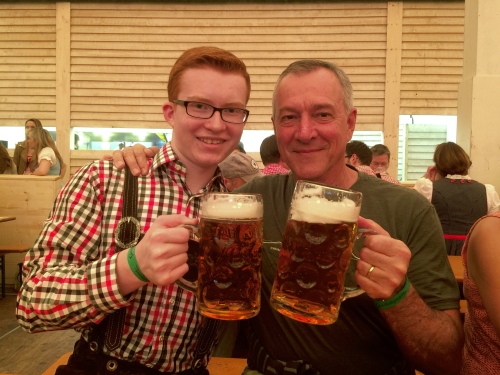 Pretty soon, the place started hopping with singing and toasting with many of the revelers getting up on their benches. There were lots of drinking songs, but we only learned the words to one of them: Ein Prosit! Here’s how it goes:

It translates, loosely to: Cheers, cheers, I’m feeling pretty good here with all you guys.

Although Heike is the real choir director in the family, Jörg took the lead on this song. 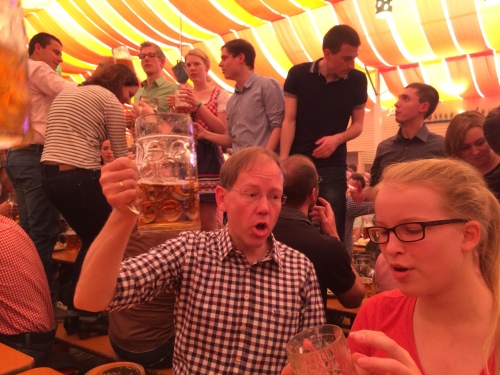 But the award for most enthusiastic singer has to go to Christoper – Prosit, Christopher! 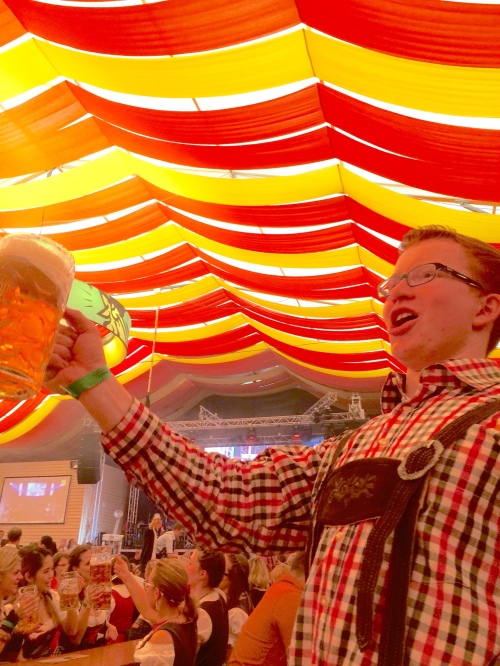 Pretty soon we were all up clapping and singing. Well, almost all. I guess it’s more of an adult thing. Or maybe it’s just the beer. 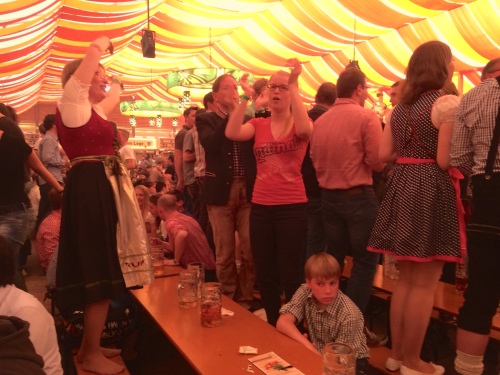 The place was really starting to rock! 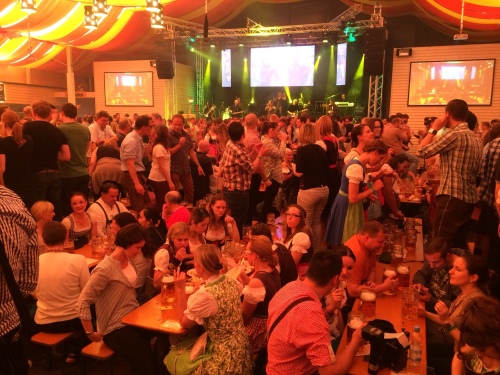 During a lull in the festivities, our waitress brought roasted chicken for us all. Surfeited, we left before things starting getting out of hand under the tent. 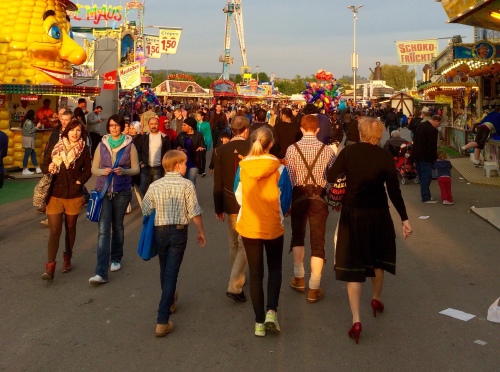 It was a really great time and something we would never have known about or experienced if we had been on our own. Thank you, Jörg, Heike and family for a great evening!