We filled up the fuel tanks on the RV and the Jeep before leaving Stewart Thursday morning, then headed up the Glacier Highway, BC37A, to the Meziadin Junction of the Cassiar Highway, BC37. About halfway, Dale spotted a black bear lazily crossing the road ahead of us. By the time we reached him, he had climbed up the embankment to our left and was busy digging for something to eat.

Once on the Cassiar Highway again, we admired the roadside wildflowers as the sky began to turn grey. 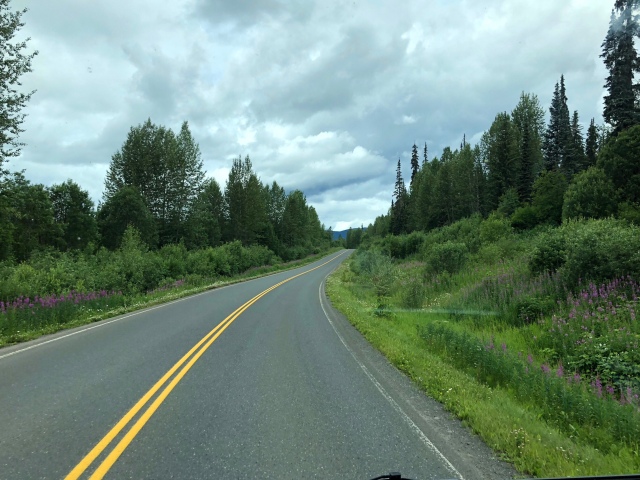 Apparently, a low pressure or frontal system had rolled in overnight and it looked like we were in for a rainy couple days. Driving the road would be more work than usual. It wasn’t long before drops began to fall. 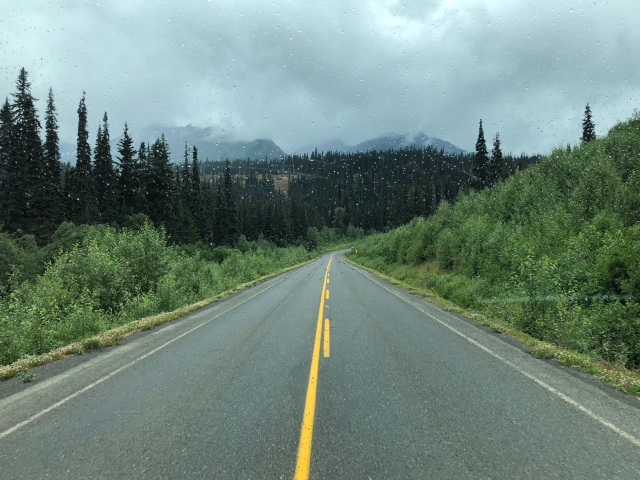 About 1.5 hours north of Meziadin Junction, just past Ningunsaw Provincial Park, we came upon a washed out section of the road, creating this horrible traffic jam – two vehicles in a row! In case you hadn’t noticed, this is a very remote part of the world.

Just a few miles further up the road, at about the halfway point of the length of the Cassiar Highway in British Columbia, the road changed: no more pavement markings, lanes a little narrower and the road surface a little rougher. The rain didn’t improve the driving conditions either, other than to keep the dust down.

I had been curious about the remoteness of the Cassiar Highway and had decided to keep track in my head of the oncoming traffic as we drove north from Meziadin Junction to our day’s destination at Itsuk, a distance of a little over 155 miles.

Passing us going southbound were: 96 passenger vehicles – about half of which were RVs of some sort (motorhomes, cab-over campers or pickups towing travel or 5th wheel trailers) and the other half were cars or work service vehicles; 13 trucks, mostly carrying timber; 11 motorcycles, usually traveling in groups; and 3 cyclists, two with panniers and one wearing a backpack! I couldn’t believe people were cycling on this desolate roadway, miles from anything but trees and wildlife. Hardy souls, those bikers.

Given that the sum total of cars, RVs, trucks and motorcycles passing us in the other direction over a 3-hour period was 120, we encountered, on average, only one motorized vehicle every 1.5 minutes. This is a very unpopulated place.

Just past the village of Iskut, we pulled into Mountain Shadow RV Park in the Kluachon Lake Indian Reserve for the night. We had no cellular service anywhere along the Cassiar Highway and only intermittent internet here at Mountain Shadow through the campground wifi and satellite connection.

We had made a paltry 195 miles this day and planned to make up the miles the following morning. 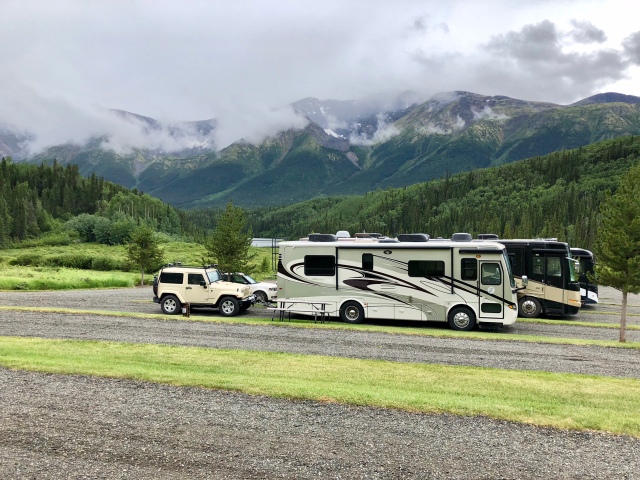 Our goal for Friday, our 5th driving day, was to reach the Yukon Territory. It proved to be another rainy day, but even in those conditions the scenery was wonderful.

About an hour north of Iskut, before reaching Dease Lake, a resurfacing project left the road riddled with potholes in the rain for several miles, making for a rough and dirty ride. Over the course of the drive so far, we have acquired two windshield chips and a broken driver’s side running light, all from rocks thrown up by passing vehicles near these construction projects.

Road resurfacing in the Canadian outback is different from what we are familiar with in the States where just the top inch or so of asphalt is scraped off and replaced. Here, it seems that the entire macadam surface is plowed up and scraped off, then replaced with intervening layers of gravel and fines and tar, then compacted and steam-rolled. The construction projects can go on for several miles, often maintaining only single-lane traffic through the work zones. When it’s not raining, the dust is unbearable. We considered ourselves lucky to be passing through this area on a rainy day.

After passing Dease Lake the rain finally stopped and the clouds parted, so we pulled off to the side of the road for lunch overlooking this pretty little lake:

Further on up the road we came to one of the few buildings on the Cassiar Highway, the “World Famous Jade City,” according to the signs, anyway. We stopped for a free coffee and a browse around. We were about to buy a jade inuksuk and some jade jewelry when I thought to ask, “Are these made here?” Answer: “No, they’re made in Cambodia. We could make them here, but it’s cheaper to get them from Asia.” The story of the modern world. We passed on the purchase, but being a rockhound, I did buy a nice 5 pound block of local cut jade that I intend to polish up and use as a bookend.

I know the piece of jade that I bought was mined here. We watched them cutting pieces right out front, an interesting process.

We continued our drive, anxious to get to the Yukon. The scenery near Boya Lake Provincial Park as we approached the border was marvelous.

Just past Boya Lake, a Pine Beetle infestation has killed thousands of acres of Lodgepole Pines, weakening the forest so that it has been further decimated by wildfire. It was a sad sight, but the Pine Beetle devastation is not limited to BC, we have it in Washington, too. 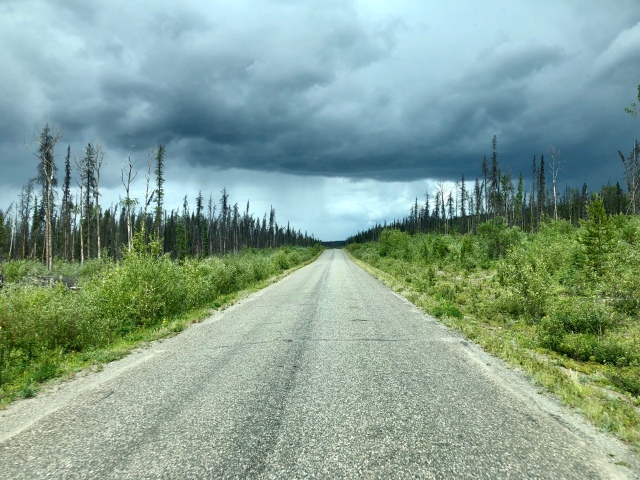 Leaving the ruined pine forests of northern British Columbia, we finally reached the Yukon Territory and a seeming flood of vehicles heading south – two in a row!

The Yukon is beautiful with deep hues of blue and green. Or maybe it was simply the fact that the sun was shining again. We are on the Alaskan Highway now, Hwy 1, and the road is quite a bit better. Heading west from the junction of the Cassiar and Alaskan Highways, the road dips back into British Columbia for several miles, then returns to the Yukon Territory. 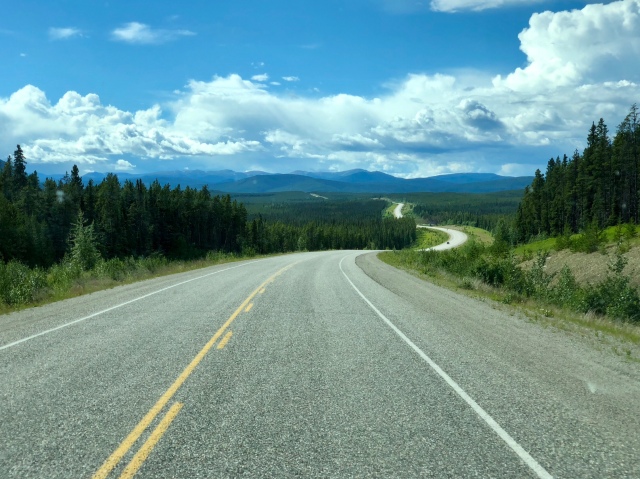 As driving day 5 came to an end, we reached our stop for the night: the Yukon Motel & Campground in Teslin, overlooking the Nisutlin River Delta National Wildlife Area to the right in the photo, below.

Distance traveled on this long driving day 5 from Iskut, British Columbia, to Teslin, Yukon Territory: 343 miles. We have now driven 1,435 miles since leaving Bellingham, Washington six days ago. Tomorrow, however, will be a short drive. Just a little over 100 miles to Whitehorse, the capital of the Yukon Territories, and if the weather clears, our first chance to get out to do some hiking!