The goal of our second hiking day from the Hurricane Ridge Visitor Center was to get to the base of Mount Angeles (elev. 6,454), lost in the clouds in the photo below. From the parking area, we first hiked up High Ridge Trail, the first half of which is paved. From a vantage point below Sunrise Point we looked down on the road from Port Angeles leading up to the Visitor Center. To our left we could see the beginning of the Mount Angeles Saddle Trail cutting across the slope.

After a slight detour up to a rocky overlook, we started off toward Mount Angeles, eyeing the wandering trail ahead of us meandering up to the beginning of the ridge. 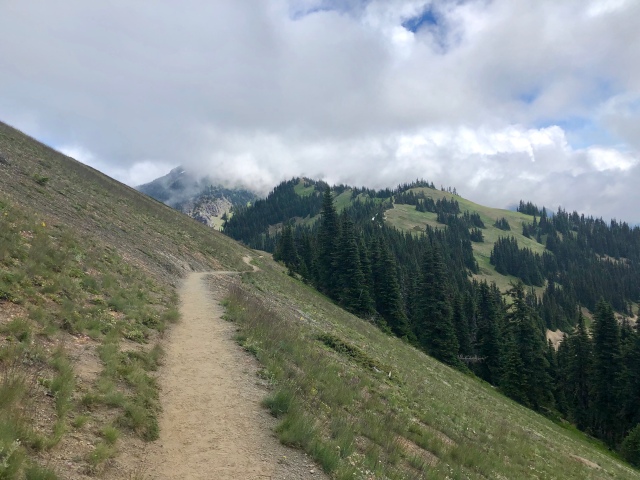 As we proceeded, we walked into low clouds being blown up the slope from below, the temperature of the air dropping dramatically as a result of the transported water vapor condensing and removing heat from the air in the process.

Wildflowers began to appear along the trail and in the evergreens.

Even if I had I lost my bearings as we made our way up the ridge, I would still have been able tell which direction we walked: north.

The Olympic Mountains cast a permanent rain shadow across the Peninsula as (relatively) warm, moist air blows in off the Pacific from the south and west. As the air is pushed up and over the mountains, it expands and cools (between 2.7°F and 5.4°F per 1,000 feet of elevation gain, depending on humidity) and the water vapor it contains condenses, first into clouds, then into rain. The rain falls on the way up, leaving dry air to descend down the eastern and northern slopes.

Thus, since the prevailing winds from the Pacific blow generally across the Olympic Peninsula from southwest to northeast, there are rain forests (like Hoh) to the southwest of the Olympic Mountains and dry plains along the northeast around Port Angeles.

You can see the rain shadow effect in the photo, below; West is to the verdant left, East is to the arid right.

There was an eerie moss hanging from the trees here.

Out of the trees, we saw wildflowers everywhere. 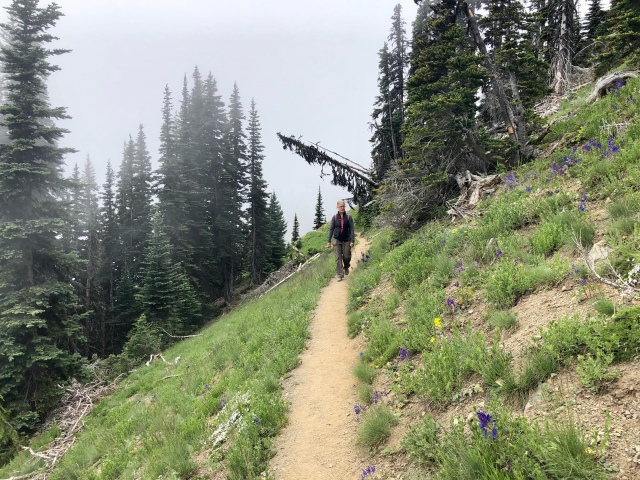 Dale tells me that we walked through (clockwise from top left): 1) Olympic Larkspur; 2) Bleeding Hearts; 3) Wooly Sunflower; 4) Avalanche Lily; 5) Jacob’s Ladder; 6) Mountain Sandwort; and, 7) Hook Violet – neither of us could identify my favorite (8).

From here, the trail required our attention, so we stopped searching for wildflowers. 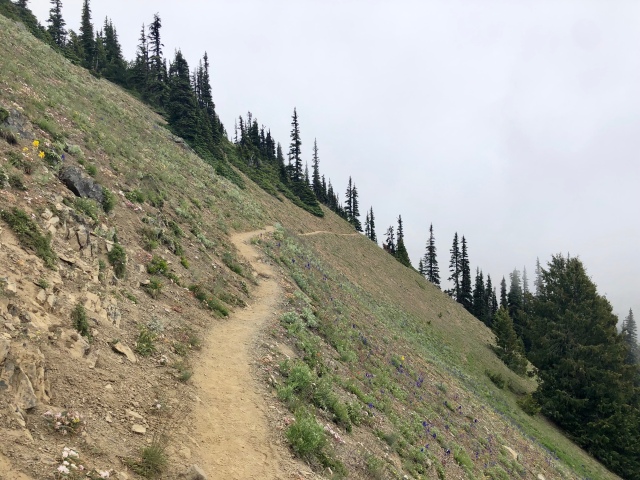 Soon, we were on Mount Angeles Saddle at an elevation of 5,400 feet. 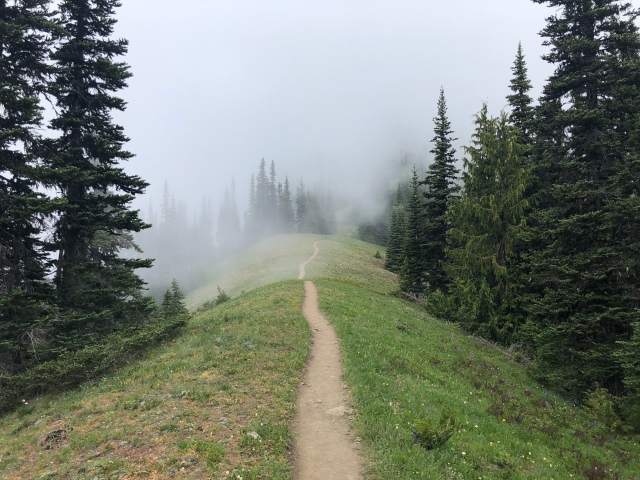 Once again we were able to admire the surroundings as we walked. This is Mountain Sandwort: 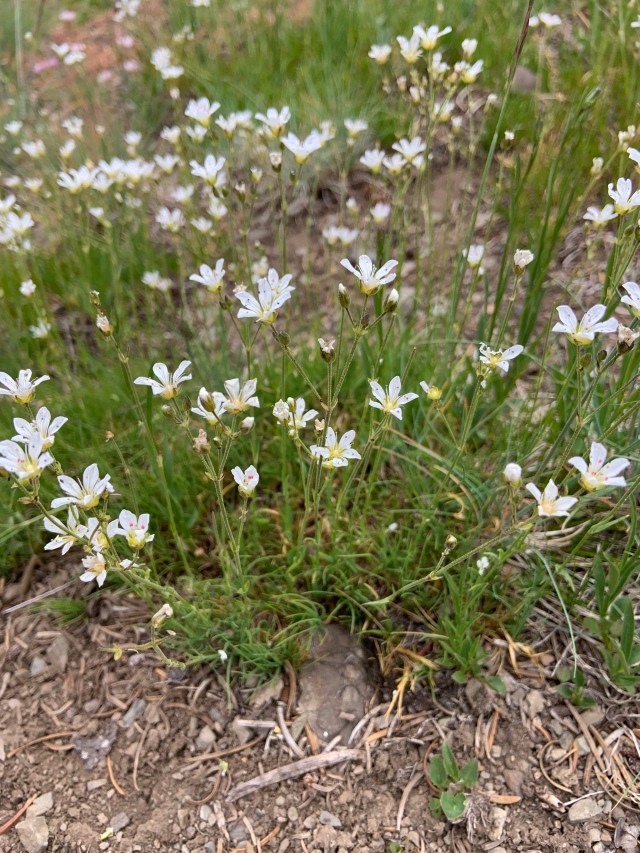 We hiked to the base of Mount Angeles, just past the junction of our trail, the Mount Angeles Saddle Trail, with the Switchback and Klahhane Ridge Trails where we stopped for lunch. We hadn’t seen any other hikers on the trail – coming or going – ever since we left Sunrise Point at the trailhead, but as we finished eating we heard voices coming up the Switchback Trail from below. We packed up, turned around and began our journey back the way we had come. 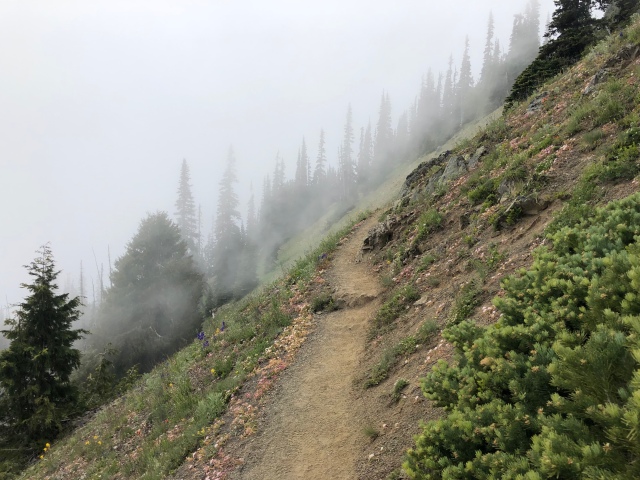 The guide books say there are wonderful panoramic views from the Mount Angeles Saddle Trail, but the vistas today were obstructed by the low clouds so we contented ourselves with our immediate surroundings. These wildflowers are Hook Violet and Western Wallflower:

Back up the switchbacks, we started running into other hikers coming from the Visitor Center. Looks like there might be enough traffic at this point to require a passing lane! 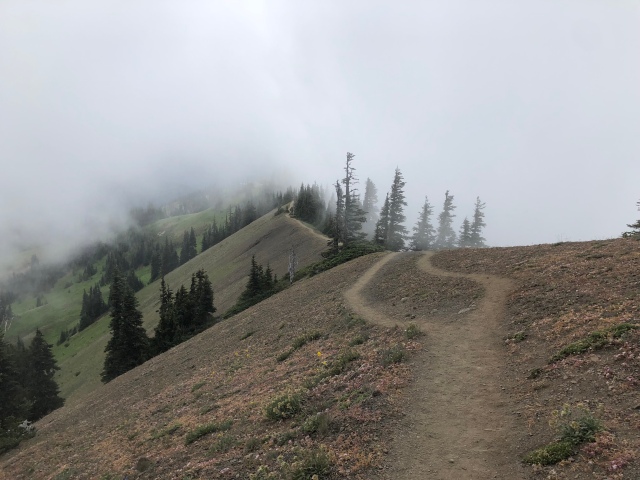 Almost back to Sunrise Point and the trailhead.

Say goodbye to Jacob’s Ladder for the day.

On the drive back to camp at Crescent Beach, we pulled over at a viewpoint. The town in the distance near the water’s edge is Sequim (pronounced “Squim”). Not visible in the photo, although I could see it at the time, is Mt. Baker, just poking above the low cumulus clouds in the distance, just east of our home in Bellingham. 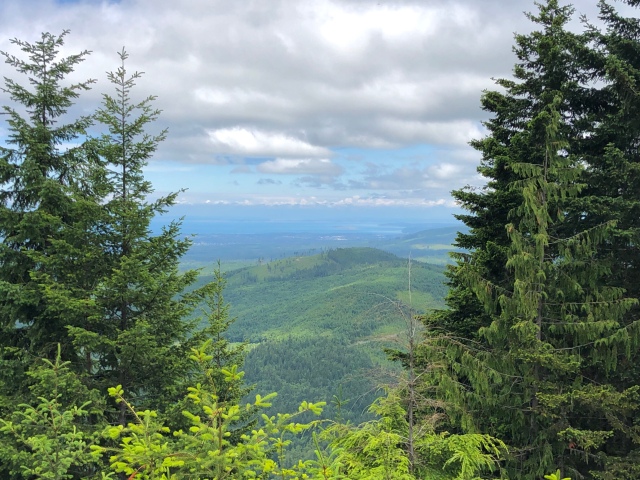 So near, and yet, so far away.