At the end of July, we headed off in our RV to the Cascade mountains to celebrate our anniversary. Driving south from Bellingham (orange star) on I-5, we took the exit to Sedro-Wooley, then continued east on WA-20, following the Skagit River uphill toward its modern source, Diablo and Ross Lakes, collectors of glacial and snowpack meltwater.

In less than two hours from home we were in the heart of North Cascades National Park and set up at Colonial Campground South in the Ross Lake National Recreation Area (red star) with enough daylight left to hike the Thunder Creek Nature Trail before going to bed. 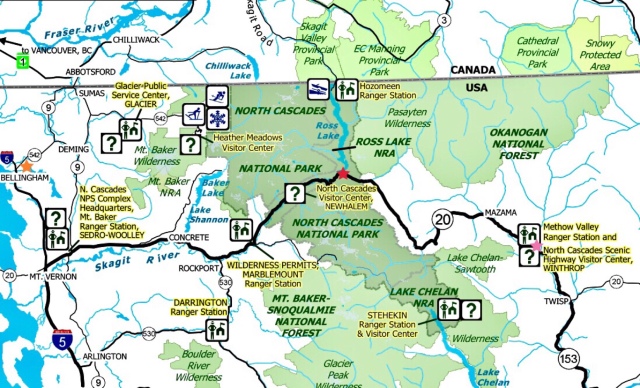 The next morning, a Wednesday, we drove the Jeep up past the Diablo Lake Overlook to the parking area for the Ross Lake Dam Trail (MP 134), then hiked 500 feet down to the lake and the dock just north of the dam to be picked up and ferried across to the Ross Lake Resort to rent kayaks for the day (rates for each of us: ferry, $6 roundtrip; kayaks, $15/hr; we were happy to discover that they rent Eddyline kayaks – we chose the Denali, slightly longer than our own Eddyline Skylarks). 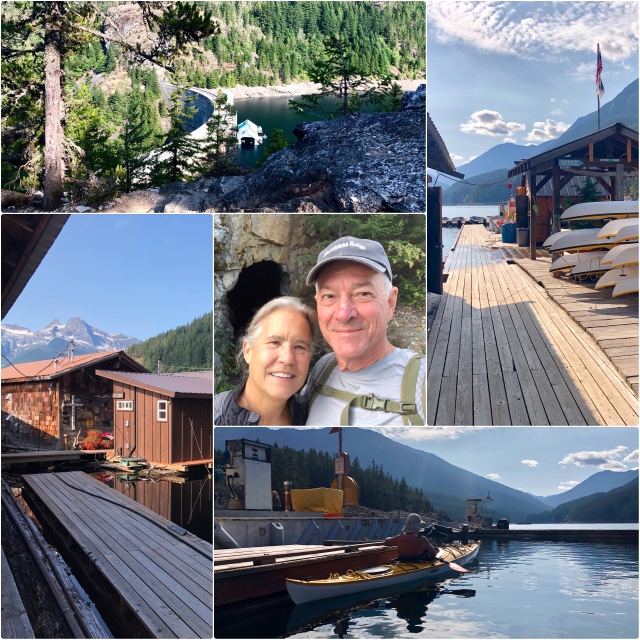 Ross Lake is the result of the impoundment of the Skagit River by the construction of a hydroelectric dam during the war years of 1938-1949. The Pacific Northwest Trail, a 1,200 mile trek from the Continental Divide in Montana to the Pacific Ocean at Cape Alava on the Olympic Peninsula, traverses the Skagit over the Ross Lake Dam.

Ross Lake Resort – which floats on the lake on huge logs – was established in 1952 on the remnants of the floating camp used by the dam construction crews. It exists in the National Park today as a concession from the National Park Service. During the Winter, when the level of Ross Lake fluctuates, the resort is detached from shore and anchored in the middle of the lake.

In the photo, below, you can see Ross Lake Dam behind Dale. Our morning hike to the ferry dock followed switchbacks for a mile downhill through the trees on the left. The stark mountain in the background is Pyramid Peak, 6 miles distant, with the Neve and Colonial Glaciers to the left of the peak 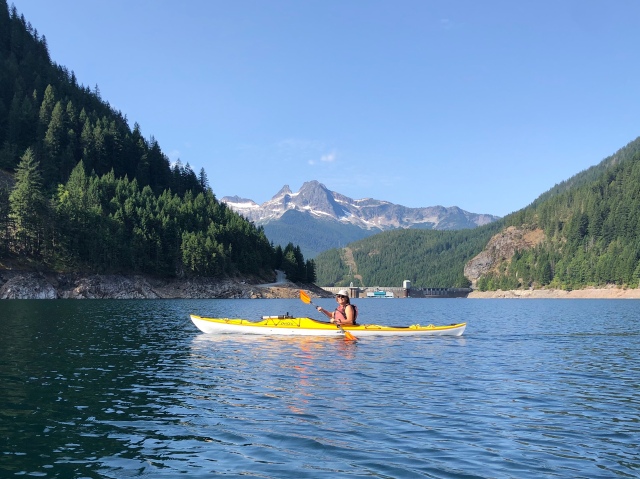 Leaving the resort, we paddled north, hugging the western shore. Rounding Green Point, we saw one of the 19 boat-in campsites that are scattered along the shoreline of this 23-mile-long lake. On this day, only 2 of those campsites were open, the result of an unscheduled drawdown, leaving Ross Lake 33 feet below it’s normal height (notice the no-longer-floating-dock in the photo, below, top left).

This was bad news for Ross Lake Resort, but good news for us – nobody was here due to the low lake level, so we had the whole place to ourselves!

We continued paddling north past an outcropping of mica schist (top right), geologic evidence of a collision between the North American plate and another drifting plate eons ago and now the location of a fault line running north-south the length of Ross Lake.

As we approached Cougar Island (to the right in the photo, above), a submerged “ghost forest” came into view. These trees were cut down 70 years ago when the valley was flooded by the dam, but their normally-submerged stumps remain.

In typical fashion, clouds formed over the adjacent mountains as the day wore on – to our south, Ruby Mountain (elev. 7,300 feet).

As we approached Roland Point, we paddled across the lake to the eastern shore in search of a landing to stretch our legs and have lunch,… 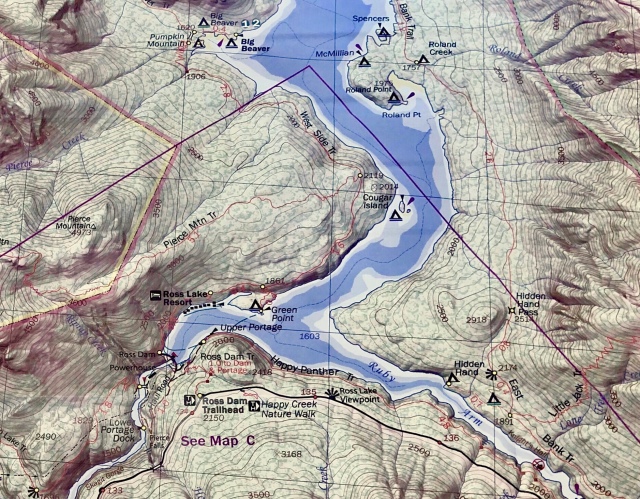 … startling a flock of Mergansers who jumped into the water and paddled away.

We beached and hiked to the top of Roland Point where we had a fine view of Ruby Mountain, noticing our ducks again down near the shore (photo, below, bottom left). So far, there had been little wind, but we had been warned that it was typical this time of year for the breeze to freshen out of the south in the afternoon, so we didn’t linger.

Back in the kayaks, we paddled back south, this time, along the eastern shore. On this side of the faultline the rocks are igneous, being formed by an entirely different geological process than those rocks on the western shore which are sedimentary and metamorphic.

The water in Ross Lake was amazingly clear; apparently, the streams that feed it are not glacial. At times it was hard to make out the waterline along the shore. The submerged tree trunks were stunningly visible below the surface (photo below, right).

As we continued south, the breeze did pick up, but we made it back to Ross Lake Resort before it got too bad. Total distance: 7 miles in three hours of paddling.

We paid for the kayak rental, then were ferried back across the lake to begin our hike back uphill to the Jeep. I looked back at Ross Lake Resort as we motored across and was surprised by the number of floating cabins available for rent.

Back in the Jeep, we drove to Newhalem for ice cream and a tour of the Gorge Lake dam power station. A nice way to spend our anniversary.