Unlike the descriptive names of the various hikes and features in Canyonlands NP, the location of our hike today in Arches NP bears the mysterious title: “Fiery Furnace.”

What few references I have been able to locate claim that

This surreal geologic labyrinth earns its name from the deep red and orange glow of the sandstone fins that, when lit by the setting sun, resemble a fiery furnace.

Could be, but I doubt it.

I think the name more likely derives from the Old Testament story (Dan. 3) about King Nebuchadnezzar and his threat to throw three Jewish faithful “into the midst of a burning fiery furnace” should they refuse to kneel down to his idols.

If it be so, our God whom we serve is able to deliver us from the burning fiery furnace, and he will deliver us out of thine hand, O king. (Dan. 3:17)

Perhaps, in the past, some explorer similarly depended on the hand of God for deliverance here.

The Fiery Furnace hike is

One of the most popular and most challenging hikes in Arches National Park, Fiery Furnace spans a roughly 2-mile route between towering, maze-like canyon walls. Exploring it is a spectacular, otherworldly experience not without its challenges. Unlike many hiking trails, which feature steep climbs and high elevations, Fiery Furnace tests your ability to keep your bearings and find solid footing in a disorienting place. There are no trail signs or markers, and GPS units have a tendency to fail among the lofty sandstone walls. Navigating the difficult passages takes stamina, agility, and acute attention to detail. 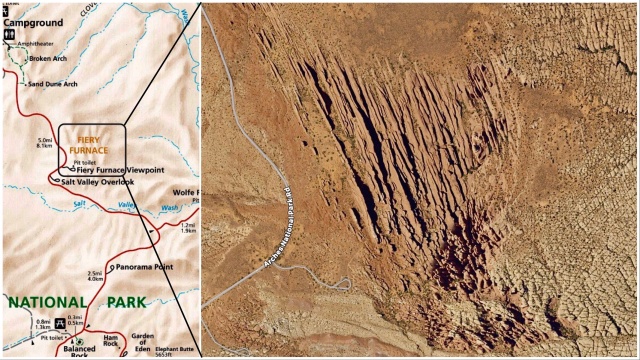 In a previous post, I discussed how fins are formed as a result of rising salt domes cracking the strata. Here the fins are more extreme because Fiery Furnace sits at the edge of a salt dome (“Salt Valley Wash” on the map, above, left) which dissolved and was washed away eons ago, resulting in its collapse and an even more complete fracturing of the surface.

The NPS website for Arches NP is pretty clear that you must get a permit to hike Fiery Furnace, so we stopped in to apply at the Visitor Center when we first arrived in Moab on Sunday. There are two options: 1) take the ranger-guided tour; or, 2) go it alone.

We arrived the day after the ranger-guided tours ended for the year, so that wasn’t an option. Hikers must apply in person for the day-permits and only 75 are issued each day, normally booked 2 days in advance. We applied for Wednesday.

Permits in hand (well, attached to my backpack), we were ready to hit the trail. 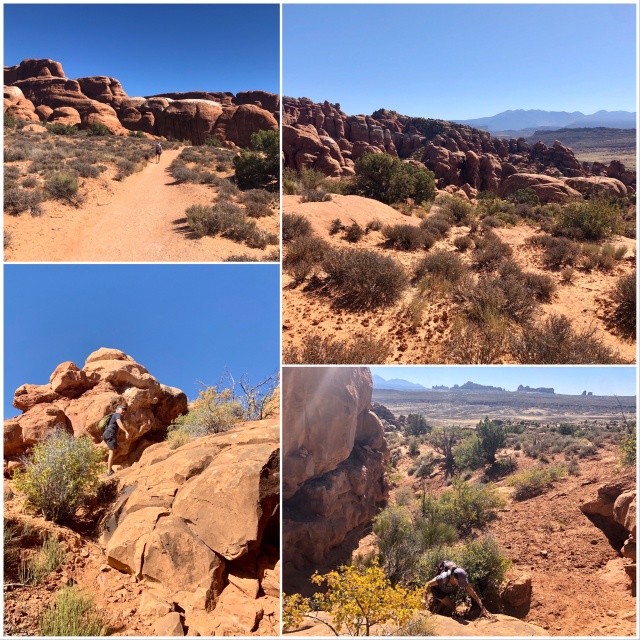 A ranger at the Visitor Center told us that in years past, a private company had a concession to take hikers into the Furnace on guided tours and that company always followed the same route which it had marked with little red arrows affixed to the fins or placed on small posts along the way in case their guide got disoriented. She said those little red arrows were still in the Furnace and that many hikers followed them through the Furnace in a counter-clockwise direction from the south.

But, she said, she preferred entering the canyon from the north and just feeling her way through. We followed her lead and headed north from the trailhead, finding our way by trial and error down dead-ends. Once inside the fins, things looked similar in every direction. 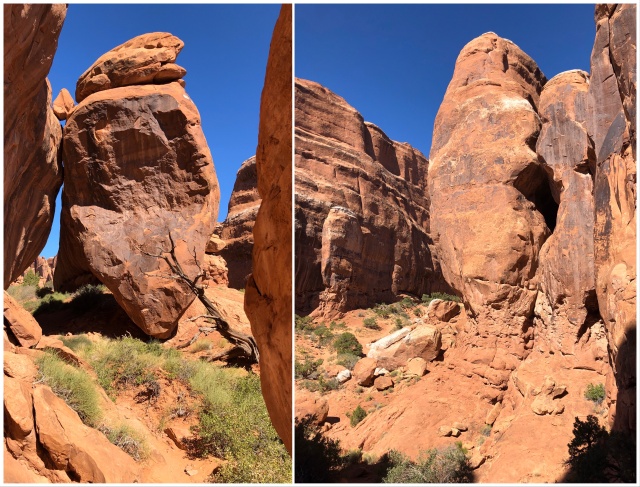 There were unmarked trails running every-which-way, many to dead-ends, as well as worn trails in the rock and a few steps cut into the sandstone. As we hiked up between two fins, I stopped to take pictures,… 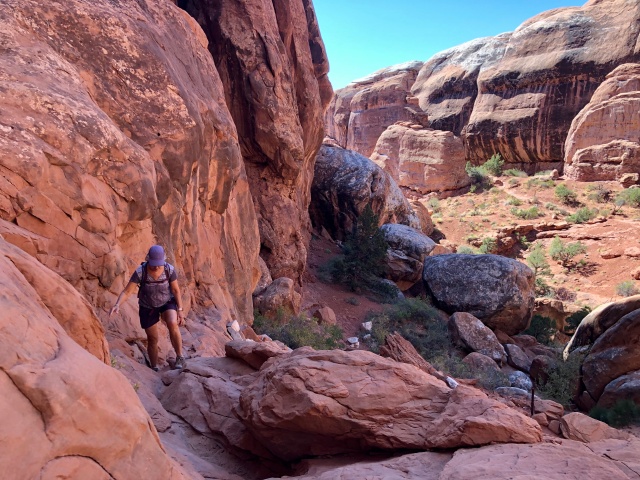 … while Dale proceeded past me, up and over a rise between two parallel fins. 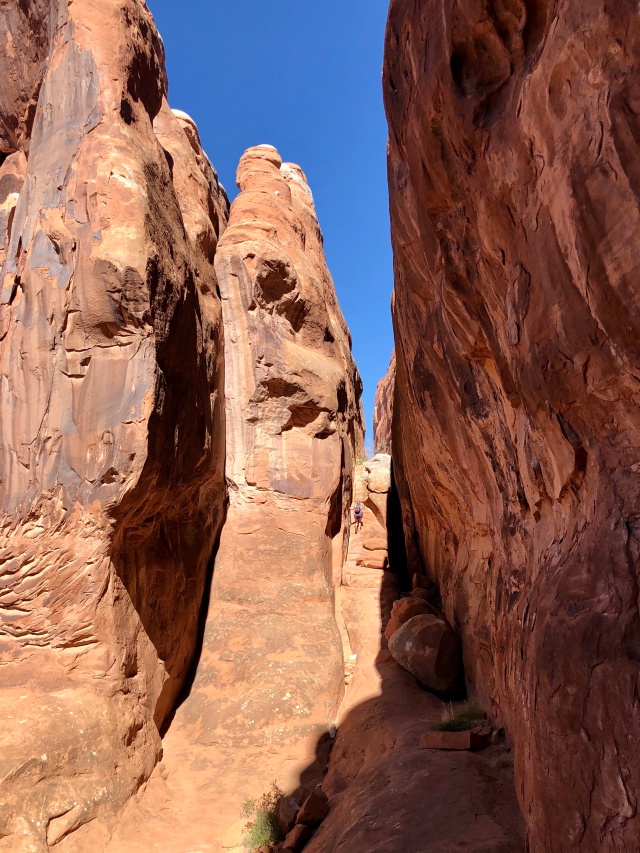 We wandered up and down the slot canyons, slipping and sliding from one to another, discovering the occasional arch or crevice as we explored (I later learned that the arch, below, is called Surprise Arch). 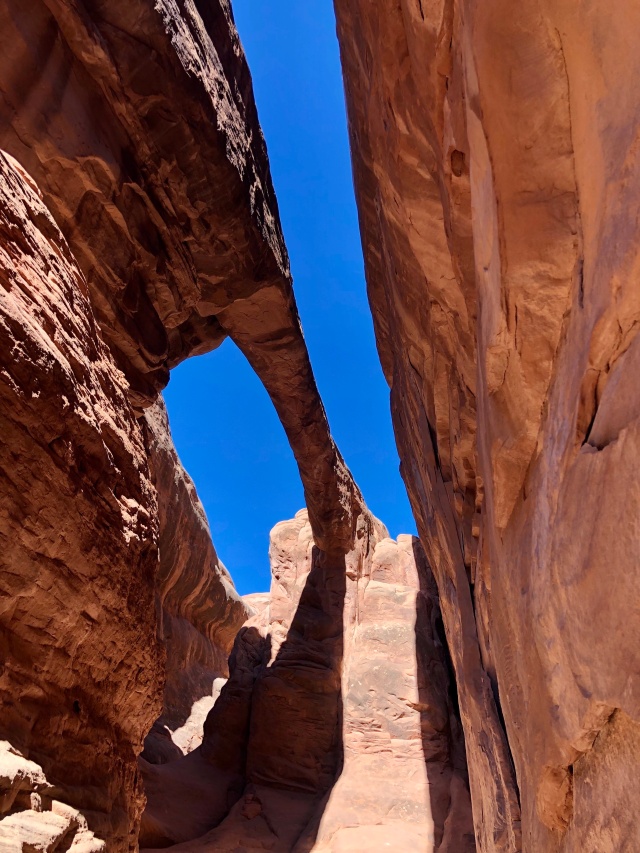 As advertised, there was plenty of scrambling… 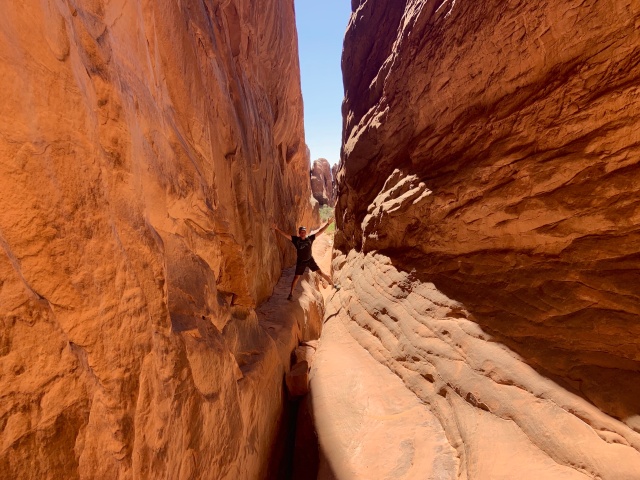 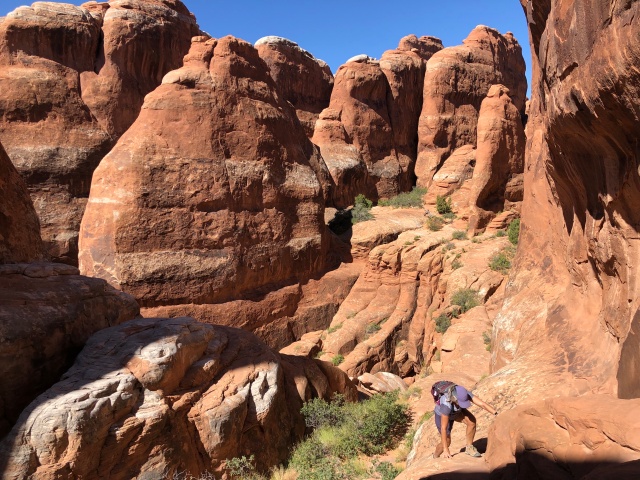 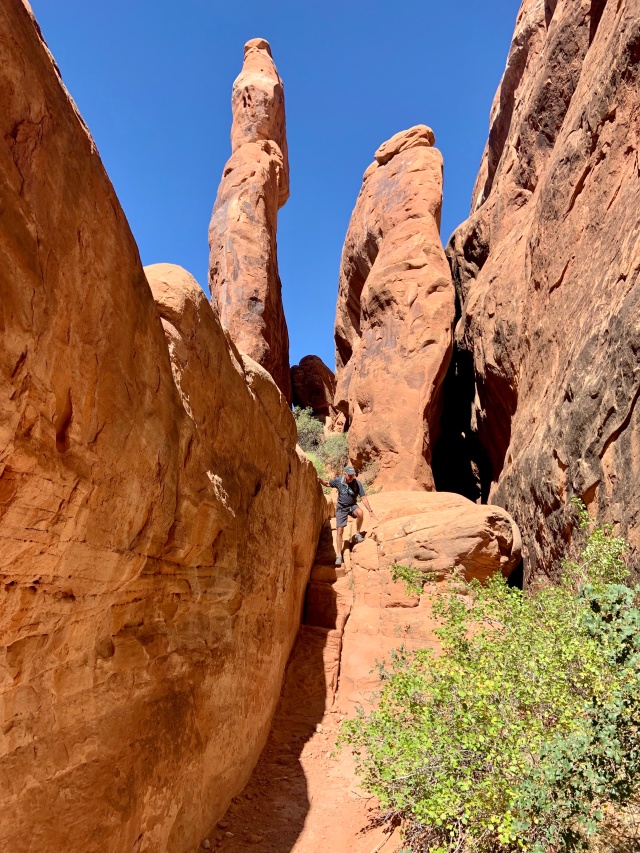 … and lots of tight squeezes. 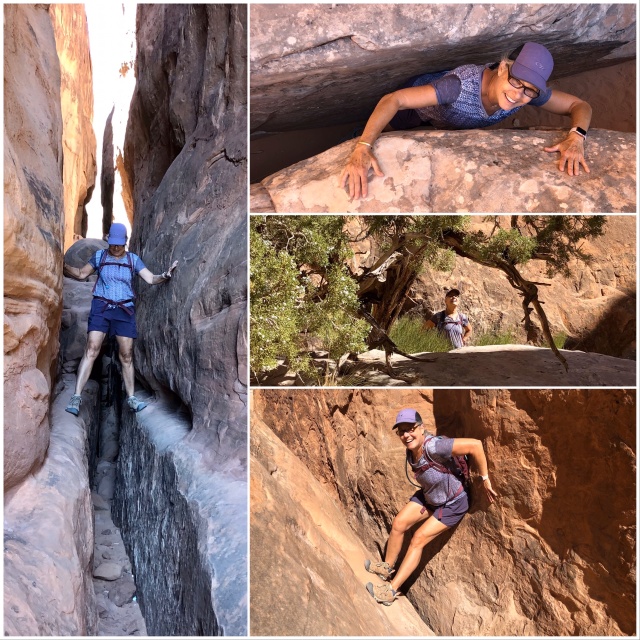 And we were introduced to hiking along the tops of fins. 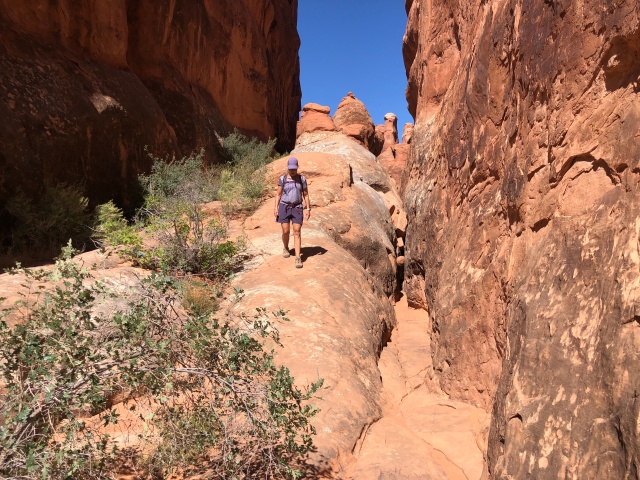 After about two hours in the Furnace, we started to make our way out at the southern end where the rocks, fins and towers are lower and more polished. By now, a well-traveled trail was becoming visible and we even found a couple of the red arrows marking the route, going in the opposite direction of our travel. We were also now meeting other hikers on that route going the other way, counter-clockwise. 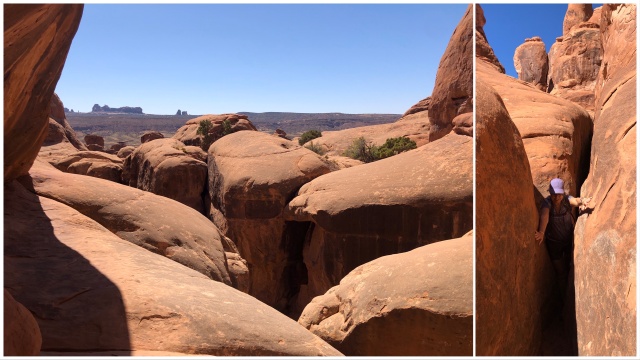 Finally, we made it out of the labyrinth. 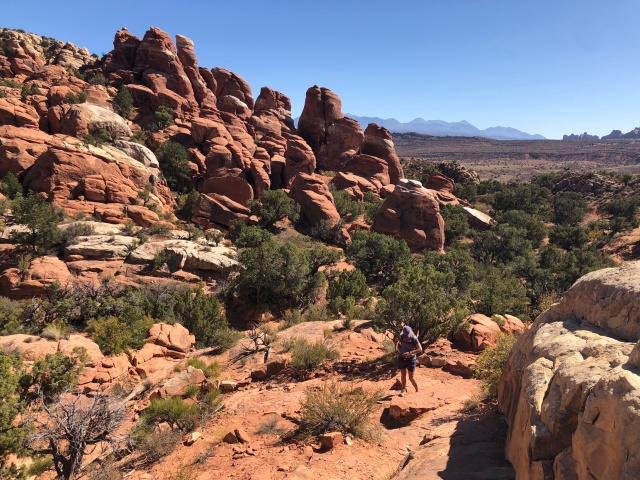 Back at the RV, I checked my GPS tracking app and was surprised to see that it had, indeed, logged our route, even though all the guides said it wasn’t possible to get a GPS signal in the Furnace. You can see how trial-and-error our track was: 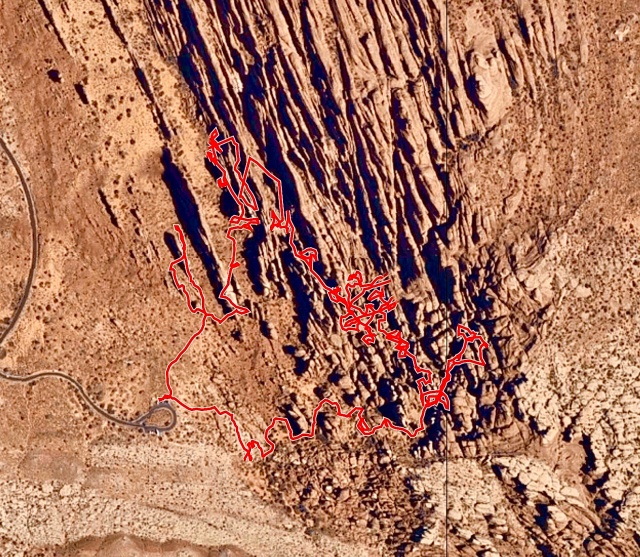 Later that day, Kelly and Dakota arrived. Over dinner at the Spoke in Moab, we planned our final two days.