Keeping with our Old Testament theme, we next hiked the Devil’s Garden, its trailhead being at the end of the Arches NP scenic Park Road, 18 miles from the Park entrance.

When Arches was designated as a National Monument in 1929 by Executive Order of President Herbert Hoover, only Devil’s Garden and The Windows were included for a total of just over 4,500 acres. In 1971, when Congress finally got around to establishing Arches as a National Park, the protected area was enlarged by a factor of 17 to nearly 77,000 acres. This is the way it’s supposed to work.

A presidential proclamation establishing a National Monument under the Antiquities Act is supposed to be a stop-gap, preserving only the most important features until Congress can act. Otherwise, one president can simply undo what his predecessor has done, as has happened several times since the enactment of the Antiquities Act in 1906, most recently with regard to Grand Staircase-Escalante NM and Bears Ears NM under President Trump.

Of course, it’s the fact that it takes Congress forever (in this case, 42 years) to actually do something that presidents since Teddy Roosevelt have taken it upon themselves to preserve huge areas (in the millions of acres) as National Monuments under the Antiquities Act. This is not a power that should be in the hands of a single individual, notwithstanding that I would like to see as much federal land as possible protected from private, commercial use and resource extraction. We are, after all, a democracy, not a monarchy.

With Kelly and Dakota having now joined us, our little tribe headed off mid-morning Thursday to the trailhead. We were getting started later than usual and had to circle the parking lot a couple times before finally finding a parking space. The trail was going to be busy. Water bottles full and bladders empty, we headed out on the hard-packed main trail. 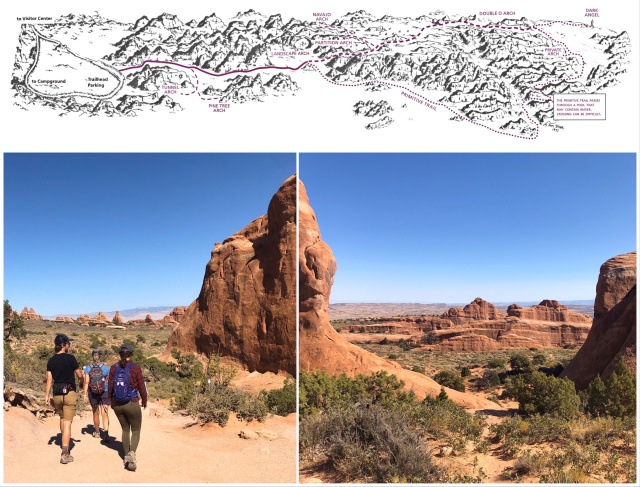 About 3/4 of a mile from the trailhead, there’s a fork in the trail: left continues on the improved trail past Landscape Arch, the point at which most tourists turn around; to the right is the beginning of the “Primitive Trail.”

The NPS describes the Primitive Trail this way:

Given the number of tourists on the main trail, we opted to hike the Primitive Trail from the fork, taking us in a counter-clockwise direction, the opposite of the way we had hiked the loop with Kelly when we were here in 2008. Going counter-clockwise, the Primitive Trail initially runs along the northeast side of the fins which generally have a northwest/southeast orientation. 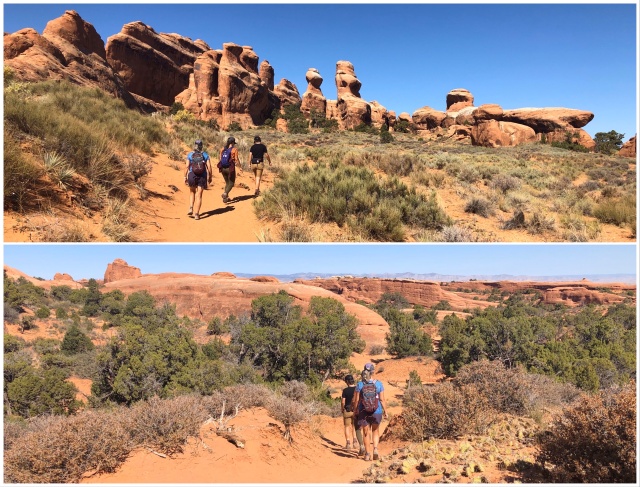 From here, we hiked down into Fin Canyon, then southwest up the wash, and then northwest between the fins. Soon, the trail began to switch back and forth within the fins, the most difficult switchback being the one we encountered in the photos, below, which led us onto the upper ledge to the left, then around the higher fin above it. Kelly and Dakota scrambled up first. 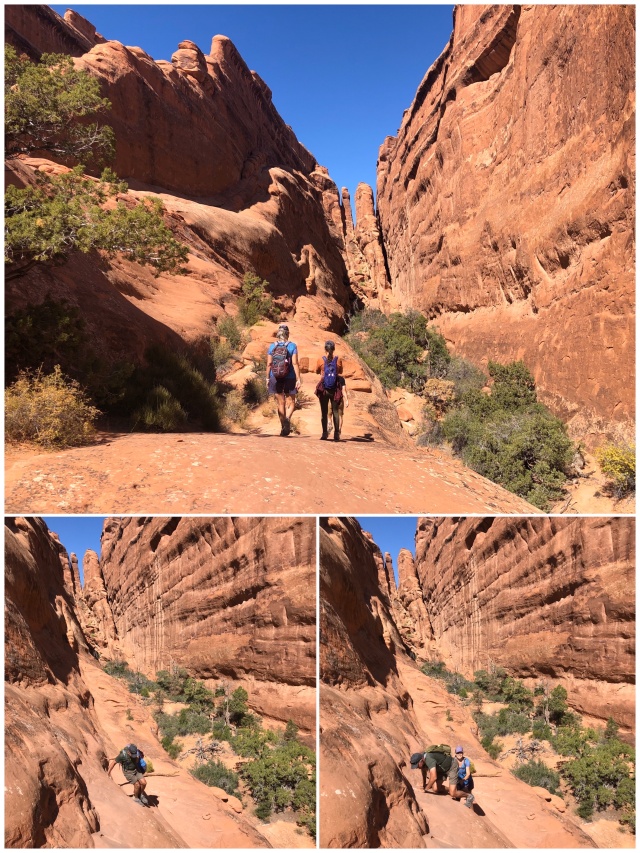 I’m guessing that it’s this part of the trail that is the reason most people hike the Primitive Trail clockwise, enabling them to slide down, rather than clamber up, this slippery sandstone section (photos above and below). 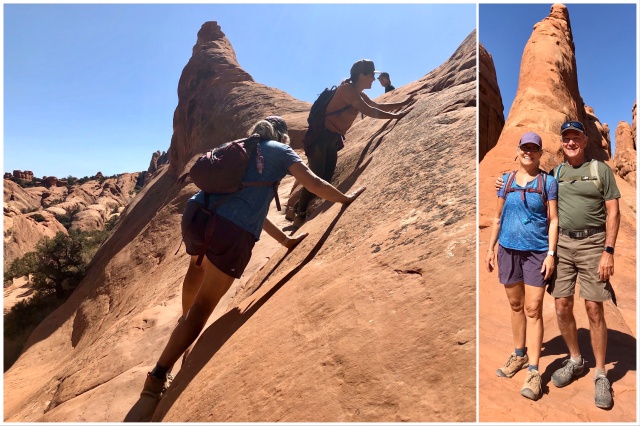 At any rate, we made it without too much difficulty. Victory salute! 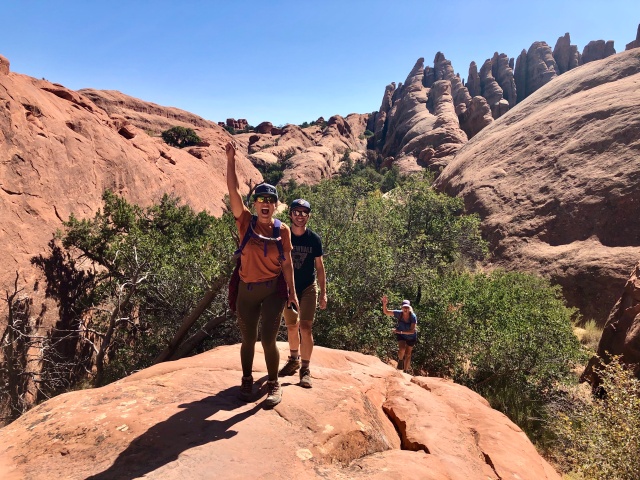 Just beyond this section we stopped for lunch, then Kelly and Dakota crossed over to a ledge on the fin opposite our resting place as Dale and I watched. 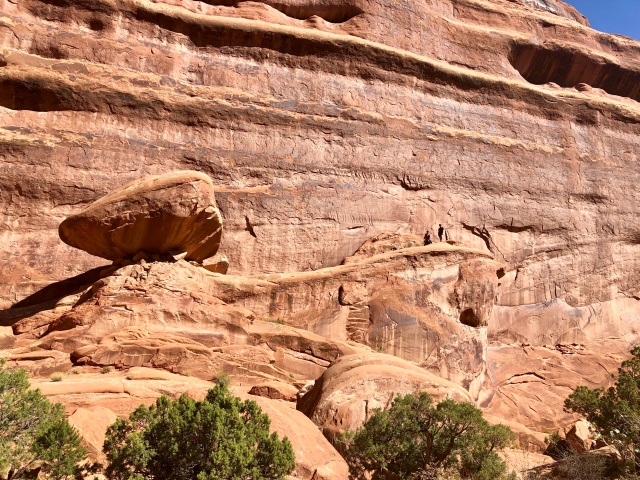 We then doubled back to the southeast (but at a higher elevation) to visit Private Arch. 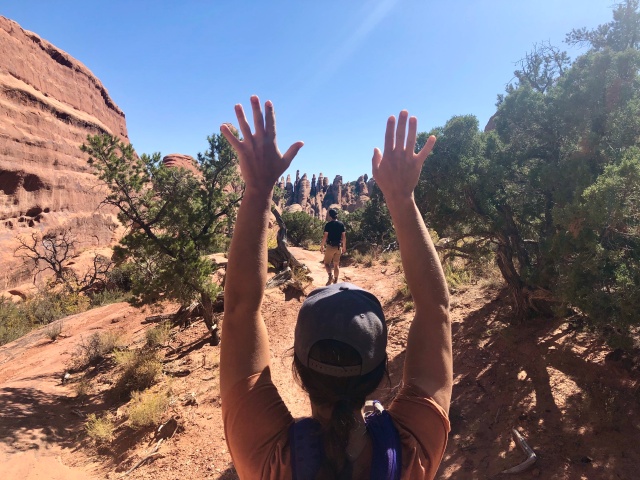 Here’s Private Arch (photo below, top left), although it wasn’t so private today; there was a group of young men that had arrived before us and were lounging around in the shade of the arch and adjacent fins. We climbed up on one of the fins to get a better view of the peculiar formation to the south. 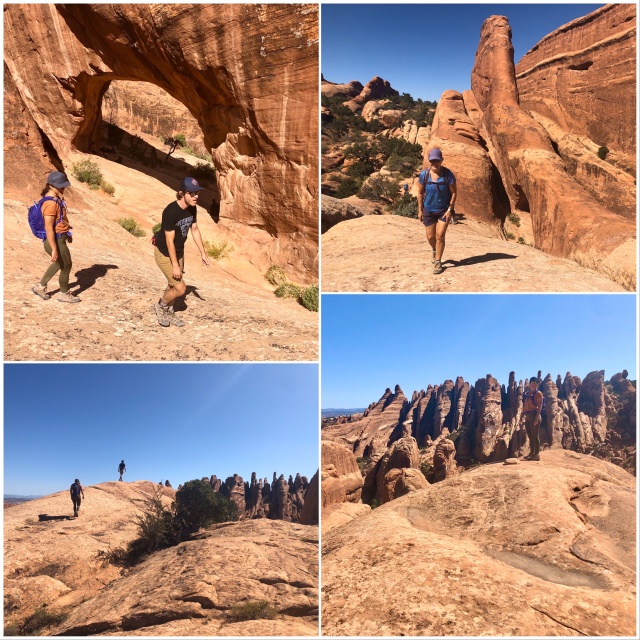 Continuing north on the Primitive Trail around the north end of Devil’s Garden, we finally arrived at Double O Arch: 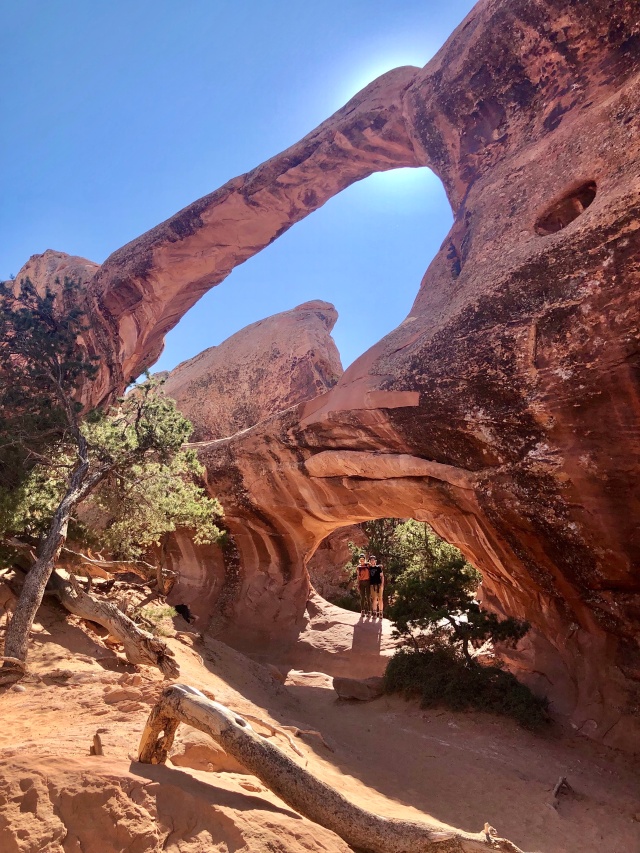 From Double O Arch, the trail leads southeast along the top of a narrow fin for 1/4 mile. Having traversed this section now from both directions, today and in 2008, I can attest that it’s much more challenging to do it north-to-south (counter-clockwise) than the other way.

Since it’s the same trek regardless of how you approach it, the difference is a matter of perception. Hiking south-to-north, the ascent is gradual and the fin narrows as you proceed, but hiking north-to-south, the ascent is abrupt and narrow, widening as you descend.

At any rate, the total distance from Double O Arch to the trailhead and parking area is 2.0 miles. 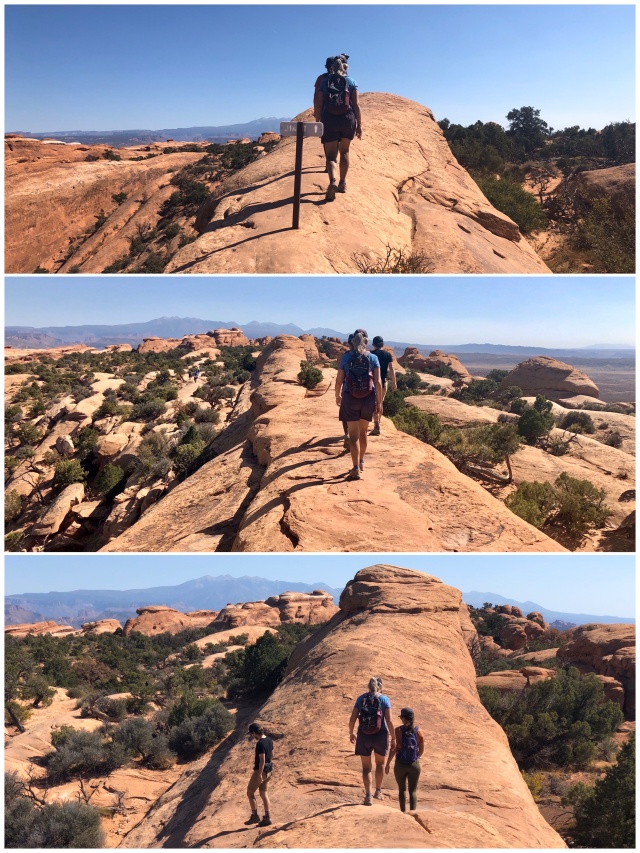 As we descended the fins back toward the improved main trail, we started running into other hikers making their way back ahead of us and a few, including a trail runner at the top of the highest fin, heading out. 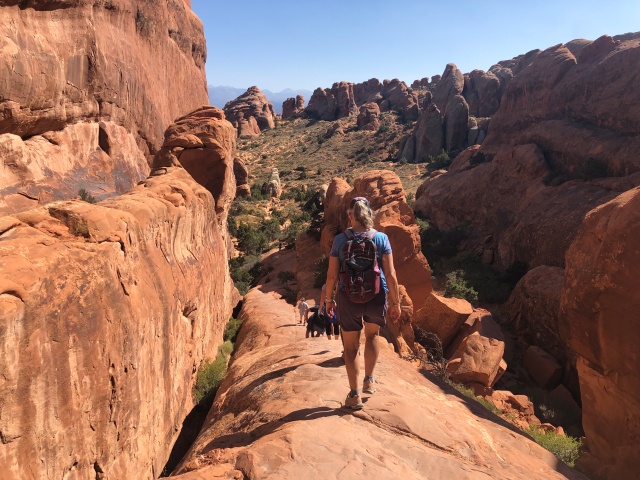 Back on the main trail, we passed by Landscape Arch (photo below). At 306 feet, it has the longest span of any known natural arch outside of several in China. It’s only 6 feet thick at its narrowest point. 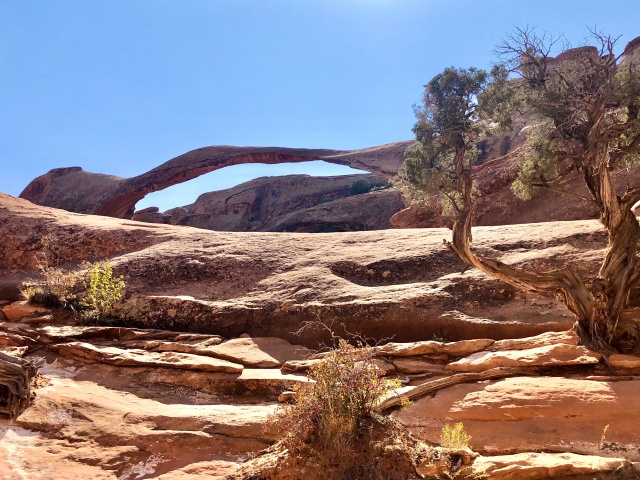 In 1991, a 60-foot long slab (11 feet wide and 4 feet thick) fell to the ground from the bottom of Landscape Arch and in 1995 there were two more detachments, which is why the NPS warns hikers not to linger beneath the arches.

We didn’t need a warning though. We weren’t going to linger, regardless. This was a fairly strenuous hike – 6 miles with a 500-foot elevation gain – and we have a big day ahead of us tomorrow! 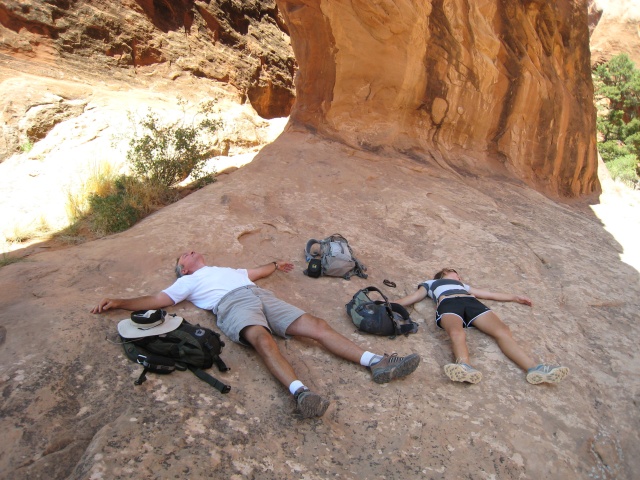