We left Eastbourne yesterday morning for an excursion to Wales, although we’re taking a couple days getting there. I have enjoyed driving here in the south of England where the roads, though narrow, are always picturesque and the people pay attention to their driving, rather than trying to talk on the phone, text, eat, drink and sightsee while driving, like so many people try to do, unsuccessfully, in the States. Traffic along the southern coast moves briskly and there are almost no traffic lights or stop signs because nearly every intersection is a roundabout. While roundabouts work well here, I’m afraid that they would cause chaos if we tried them in the USA since we Americans have, generally speaking, an aggressive driving culture. For roundabouts to work, drivers need to be accommodative.

As we’ve driven further north, however, the roads have become more crowded and the drivers a little faster and less forgiving. And, by the time we reached Salisbury yesterday, approaching rush hour (a misnomer if there ever was one), traffic was at a near standstill. I discovered, to my chagrin this morning while reading one of our guide books, that driving in the city center here is not recommended. I’ll second that one. It turns out that there is a ring-road and most people stay on the outskirts of town and take a park-and-ride bus into the city center.

We maneuvered through the maze of one-way and pedestrian streets last evening upon our arrival in the city center, avoiding buses and delivery trucks, and pulled in to the first and only hotel we saw that had on-site parking. It turned out to be a lovely choice. After getting settled at the hotel, we took a walk around Salisbury as the sun began to set – a perfect time for picture-taking. Our immediate destination was Salisbury Cathedral, an Anglican cathedral with the tallest spire in Britain, built in the 13th Century:

We’re going to take a tour of the Cathedral this morning before we leave town, so I’ll save my comments about it for a later post; but here are a few pictures of its magnificent exterior: 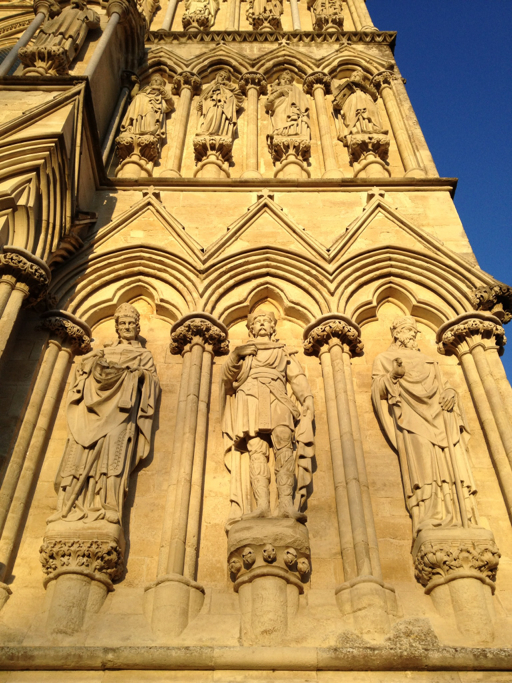 After walking around the exterior of the 60 acre Cathedral grounds, we came upon a number of ancient buildings on the other side, now occupied by restaurants, pubs and shops, such as this one which is available for rent. They need an ice cream parlor if you’re interested.

The Cathedral lies within a walled compound that has just a few gates that they still close at night, currently around 10:00 p.m. Here’s one:

Salisbury is a very old crossroads and market town. In the medieval days, the King granted rights to the towns to conduct various types of markets. There were four markets here in Salisbury and on our way back to the hotel, we stumbled upon the location of the poultry market, marked by this market cross, built in 1355: