We are baseball fans. But while baseball has been with us since the mid-1800s, it’s just not as old as cricket, the British national past-time. It turns out that cricket – that other bat and ball sport – was first played in southern England (where we’ve spent our time, so far) way back in the early 1500s.

I, of course, would never have known this nor even cared, but for the fact that as we left Bath yesterday, we drove past the Bath Cricket Club and there was a game going on, so we stopped to watch for a while.

From our American vantage point, it looks like a peculiar form of baseball. The only thing I could figure out about the game from just watching was that there’s a pitcher and a batter, but everybody else on the field seems to spend inordinate amounts of time standing around, doing nothing, then all of a sudden, they all run around yelling and waving their arms. Very perplexing.

So, I walked over to the clubhouse where a teenage girl was sitting, watching the game, and asked if she could explain the rules to me. I’ll do my best to summarize:

Like baseball, the goal is to score runs. The bowler (pitcher) bowls the ball toward the wicket (home plate) and the batsman (batter) tries to hit the ball. Or not. The batsman does not have to swing. In fact, he doesn’t ever have to swing. There are no strikes or balls and the bowling (pitching), theoretically, could continue all day long. Or, at least until the bowler manages to hit the wicket (three vertical posts, stuck in the ground); in which case, the batsman is dismissed (out) and he then leaves the field and is replaced by another batsman from his team.

Now, you’ll notice in the picture, above, that there are two batsmen on the field. One takes his turn batting; the other is a runner until his turn to bat comes up. These are the only offensive players on the field at any one time. There are 11 defensive players. The guy in the white scientist’s lab coat is the umpire or referee or whatever they call him

Here’s how the playing works: If a batsman decides to swing and he hits the ball, he has to run to the other wicket, carrying his bat. As best as I can make out, if the team in the field doesn’t catch the ball in the air, or, if the batsman gets to the other wicket and touches the ground behind the wicket with his bat before the fielding team throws the ball at the wicket and hits it, then the batsman scores a run and stays at that other wicket and a new batsman comes up to bat. The batsman that wasn’t batting has to run for opposite wicket and I think the fielding team can throw at his wicket, too. In the photo, below, you’ll see that the ball is now being pitched from the opposite wicket to a new batsman. The whole thing can make you go a little batty.

This goes on… and on… and on… until the team makes 10 outs, then the fielding team switches with the batting team. After they make their 10 outs, that’s an inning. Thank God they only play two innings per game.

We stayed until this game ended and the teams left the field, patting each other on the back and shaking hands, but I didn’t see any high-fives. It’s a very gentlemanly sport; proper, so to speak. 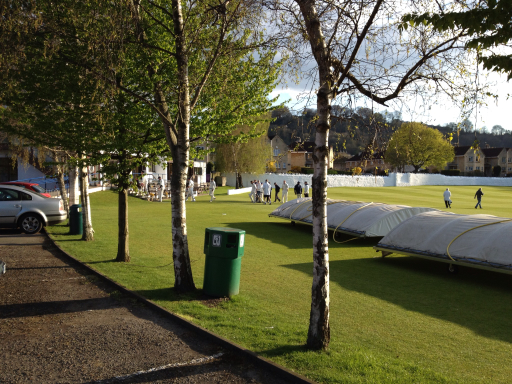 The only thing I can tell you for sure about the match we watched is that one of the teams won.