We didn’t stay at the Tower of London for very long since we’ve been to several other castles that we’ve found to be much more interesting for their history and authenticity. I don’t mean to say that the Tower is anything other than a “must see” in London; it’s just that it is clearly maintained today as a tourist attraction and it was difficult to tell the original Norman, Plantagenet or Tudor parts of the complex from what has been refurbished or reconstructed in more modern times.

To start our tour, let me show you (as I often do) a model of the Tower in order to orient you to the photos that will follow. 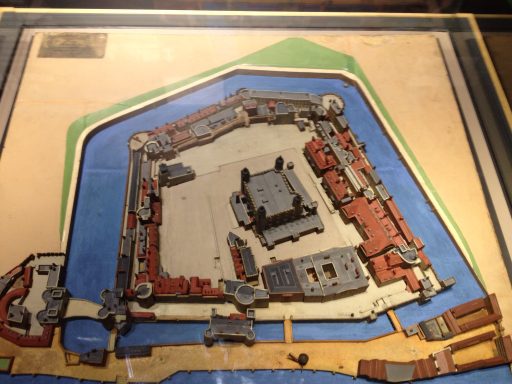 In the photo, the River Thames is at the bottom; the main gate (which is also the oldest part of the Tower) is at the bottom left, on both sides of the moat which surrounds the castle; and, the main palace, called the White Tower, is in the middle.

We, of course, entered through the main gate, built in Norman times on the site of what was believed to have been a Roman fort: 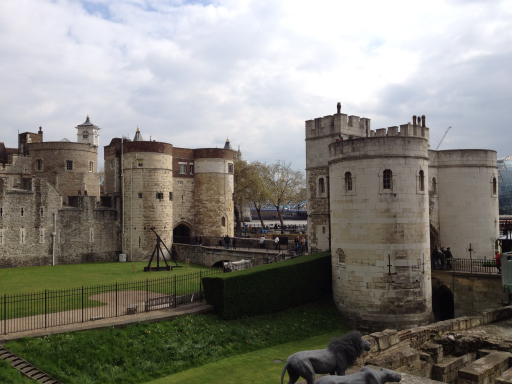 You can see how a fortress like this could impress the local population, which was one of the main reasons the Normans built it – look at the catapult down in the moat, that was the main attack weapon before gunpowder was invented. We crossed the bridge over the moat that connects the outer and inner gates, where I stopped to take a closer picture of the catapult and the moat. 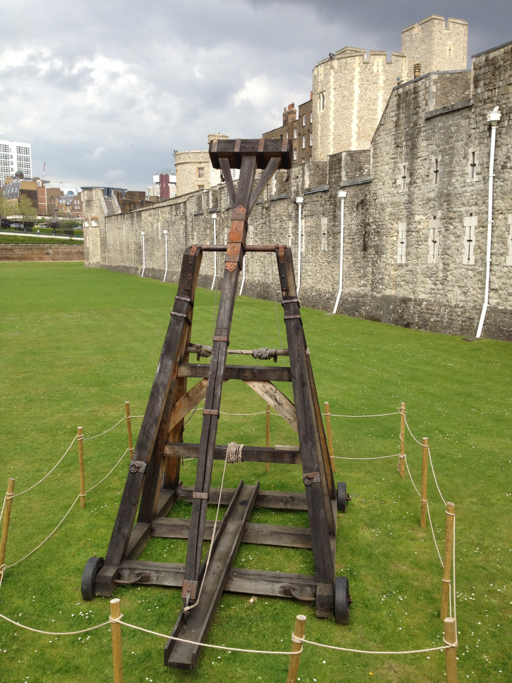 Once inside, we walked along the top of the outer wall which stood on the river to the southeast corner, then took this picture looking back at the main gate to show the part of the castle that is said to be the oldest. You can see the crumbling wall from the original Norman construction from around 1200 A.D. 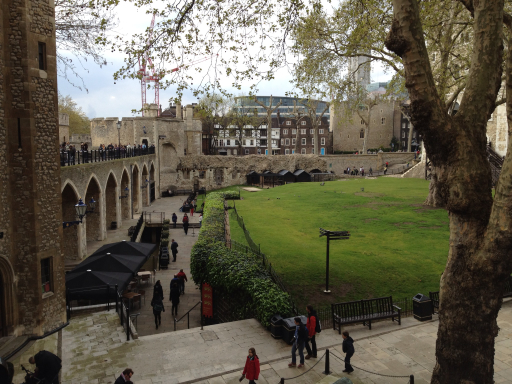 To the right in the picture above you can just make out the edge of the White Tower which was the King’s lodging when he was in residence, shown in its full glory in this photo: 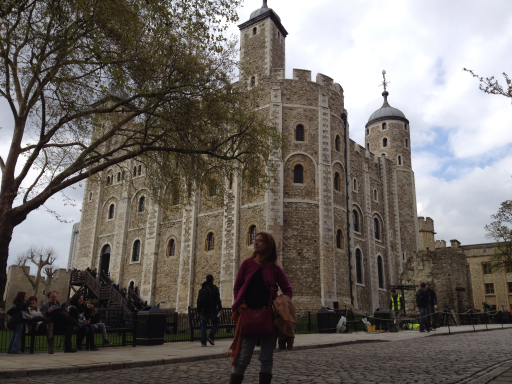 I went inside the White Tower while Dale rested with a cup of tea. The interior has been turned into a museum of medieval weaponry and armor. The photo below shows the parade armor of King Henry VIII, made in 1516. Henry did like to joust in his earlier years, though later in life he became quite obese with a waist measurement of 54″, so I doubt he did much horseback riding toward the end. 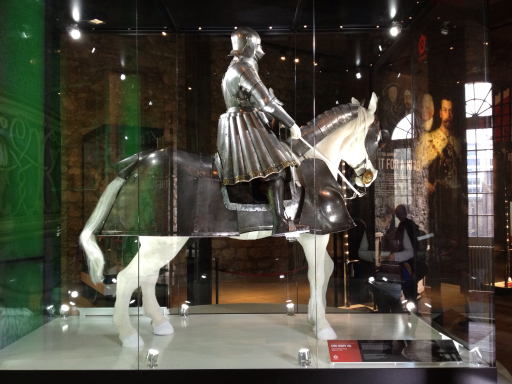 This collection of mortars, stored in the basement, is the type of weaponry that made castles throughout England and the rest of europe obsolete by the 1700s. 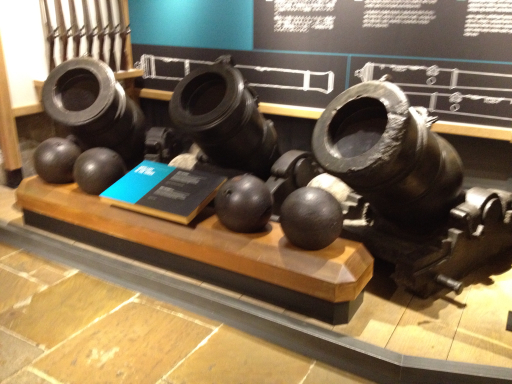 Though it might not look it in the photos, the castle was packed with tourists, mainly groups of students, most of whom seemed to be Italian, like this bunch that we followed on our way out. 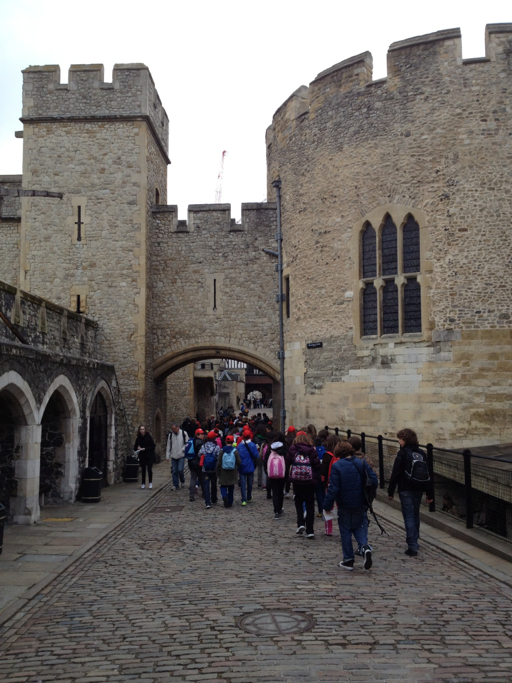 Along the river, the moat is full of water and there’s a gate called the Traitor’s Gate that opens into the moat so that the castle can be accessed from the Thames. This gate got its name from the fact that in Tudor times the Tower of London became a prison and place of execution (Anne Boleyn, one of King Henry VIII’s wives, was beheaded here). It was common practice for the king to declare a political adversary a “traitor” and then have him or her shipped off down the river to the Tower to be imprisoned there; hence, “Traitor’s Gate.” 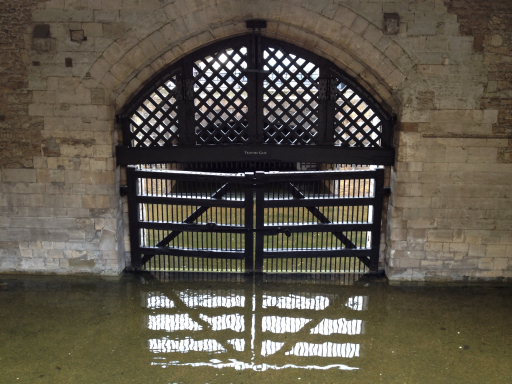 It seemed appropriate that the sky darkened and became foreboding just as we got to the Traitor’s Gate and this part of the Tower of London. 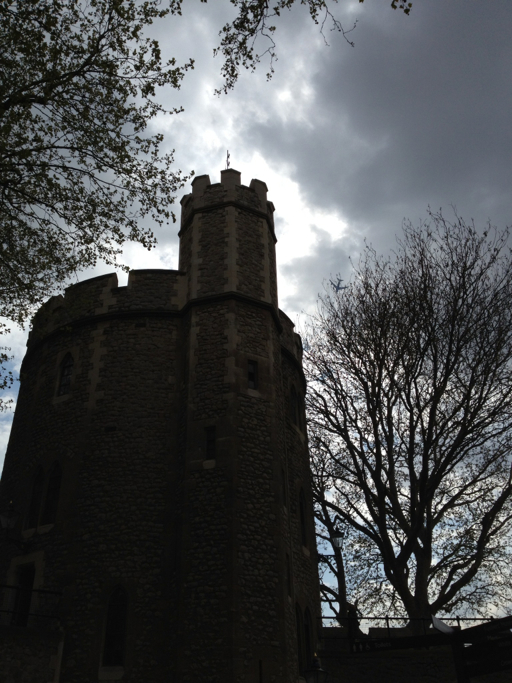