In 1666, a fire started in a bakery that got out of control and consumed most of the city of London within the confines of the old Roman wall. Most buildings at the time were built of wood and the fire raged for four days, destroying the original St. Paul’s Cathedral and over 80 other churches, not to mention more than 13,000 other buildings.

Here is a monument erected on the site where the fire started:

This morning, at 1:30 a.m., we were awakened in our hotel by a piercing siren: a fire alarm! I got up, opened the door and looked down the hall. No sign of fire, smoke or panic. Dale called the front desk and was told that they were working on turning off the alarm. Meanwhile, another hotel guest came out of his room and said that he’d been staying at this hotel on and off over the last two years and that this was the third time this had happened while he was there. He nonchalantly returned to his room; no one else seemed to be concerned either.

So, I shrugged it off, went back into our room, and we pulled the covers up and the pillows over our heads to muffle the blaring sound. After a while, I got up again to look out into the hall since the siren continued to sound, now for over 15 minutes. When I pulled open the door, I was immediately met by a hotel security guard who said, “What are you doing still here? Everybody has evacuated; there’s a fire alarm going off!” To which I responded, “WHAT? I CAN’T HEAR YOU BECAUSE OF THE ALARM.” Just kidding. I said, “The front desk didn’t seem too concerned when we called them.” And he responded, “Well, you have to evacuate. Everybody else is already downstairs and across the street.”

Actually, not everybody had already evacuated; the security guards were on our floor to evacuate two elderly people in wheelchairs. 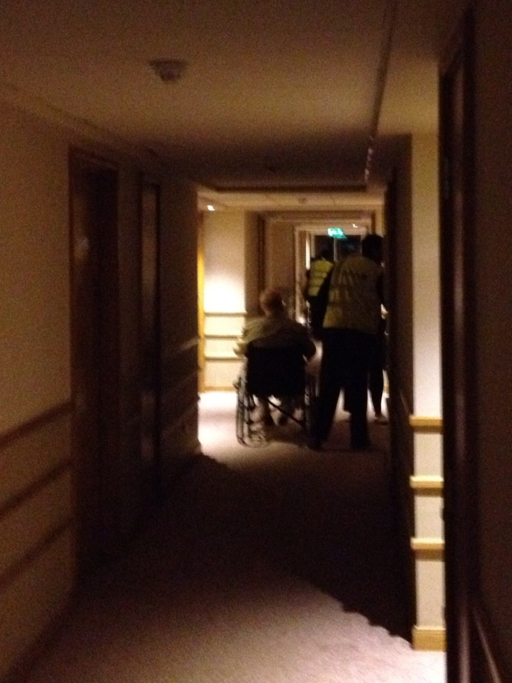 We gathered up our passports and valuables and followed them into the fire exit stairwell (we were on the 6th floor) and just as we got in there, the alarm went off and we were told we could go back to our room.

They told us this morning that the hotel was completely full and that all 600 guests – except for us – had evacuated!

Anyway, there was no fire.

A few hours later, we tiredly hailed a cab to the train station. Though most taxis in London are black, ours was a nice red one with a friendly driver.

And he got us to Victoria Station just in time for our train back to Eastbourne. 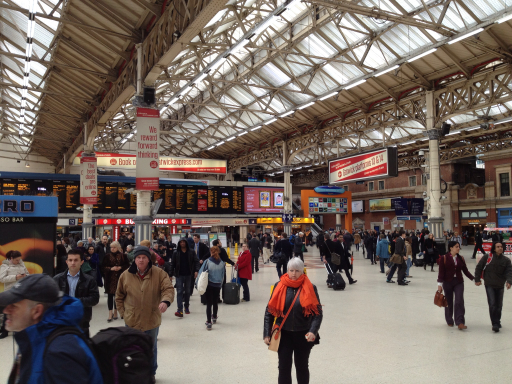